Will Modi-Xi Succeed in Doing What Their Predecessors Couldn’t? 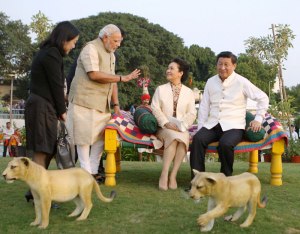 There are four ways of looking at the incursion by Chinese troops in Ladakh that occurred even as China’s President, Xi Jinping was in India; an incursion which ended up casting a shadow over what was otherwise a significant and even historic visit.

Some strategic analysts see the incursion as the product of a deliberately, carefully thought-out decision taken by Xi himself that is meant to show India its place and remind the country that its boundary with China continues to remain disputed. These are the same analysts who see the growing Chinese economic relationship in South Asia and its talk of a ‘Maritime Silk Route’ as nothing other than an attempt to encircle and contain India.

The second theory is that a faction-driven Chinese leadership is divided over how to deal with India, and that even though Xi himself might be making an effort to reach out, the Peoples’ Liberation Army is unhappy with this and would rather ratchet up the tension. The incursion at Chumur, then, is the PLA high command’s way of raining on the civilian leadership’s parade.

The problem with these two theories is that they clash with China’s fundamental strategic objective vis-a-vis India today, which is to ensure that the country does not bandwagon with the United States and Japan in an anti-Chinese alliance. Xi, or some cabal of PLA generals who may be staging their own provocation, both know that repeated border provocations will only end up driving India into the arms of China’s global and regional rivals.

The third possibility is one that Xi himself offered during his interaction with the media on Thursday: “Due to non-demarcation of the border, certain incidents take place.” He added: “But both countries have mechanisms to handle such incidents.”

Xi’s explanation is plausible and I have heard Indian officials offer the same view, but it begs the question of why the Chinese side has been unwilling to expedite demarcation – a process that is distinct from an actual settlement of the boundary question. As Prime Minister Modi noted in his remarks, “clarification of [the] Line of Actual Control would greatly contribute to our efforts to maintain peace and tranquility” and hence Xi should agree to “resume the stalled process of clarifying the LAC.”

Just so that we are absolutely clear, India and China don’t agree on where the border between the two countries should be and they also don’t fully agree on where the LAC lies. So when one side is patrolling in what it believes is its side of the LAC, the other side may see this as an intrusion.

In 1996, the two countries signed an agreement on confidence-building in the military field along the LAC, committing themselves to “speed up the process of clarification and confirmation of the LAC”. The agreement stated: “As an initial step in this process, [India and China] are clarifying the alignment of the LAC in those segments where they have different perceptions. They also agree to exchange maps indicating their respective perceptions of the entire alignment of the LAC as soon as possible.”

Due mainly to China’s reluctance, the task of clarifying and confirming the LAC’s alignment didn’t get very far. Eventually, in 2003, the two countries decided to expedite a solution to the boundary question itself via a dialogue process involving politically-empowered Special Representatives (SRs). Eleven years and 17 rounds later, unfortunately, those talks appear to have hit a dead-end, though Friday’s joint statement reaffirmed the “utility and significance of the mechanism of Special Representatives for seeking a political settlement of the boundary question.”

While India and China agree that the process of clarifying the LAC’s alignment will be without prejudice to either side’s position on the boundary question itself, it is likely that the Chinese fear the exchange of maps would weaken its negotiating hand.

This suggests a fourth possible explanation for the latest incursion: That while it is the specific product of local-level disagreements over where the LAC lies, without any immediate gain envisaged or expected, the underlying cause is the visible hardening of China’s stand on the boundary question in general. But this theory too throws up a counter question. As Ambassador C. Dasgupta has noted, this hardening ought to be reflected in greater intrusions in the eastern sector, i.e. Arunachal Pradesh, where the Chinese have been pressing their claims with renewed vigour, rather than in the western sector of Ladakh-Aksai Chin, where they have been occurring with greater frequency.

Even if we cannot be sure about China’s motives, one conclusion is clear. That while the Indian Army is fully capable of responding to, containing and reversing these intrusions, such incidents add an inflammatory layer of tension and uncertainty into the bilateral relationship.

In his remarks to the press, Modi, who read from a prepared statement rather than going extempore, went public with India’s uneasiness: “I raised our serious concern over repeated incidents along the border. We agreed that peace and tranquility in the border region constitutes an essential foundation for … realizing the full potential of our relationship. This is an important understanding, which should be strictly observed.”

These carefully drafted words fell short of threatening to make bilateral progress conditional on an end to such incidents but they underlined the fact that the relationship’s potential is being compromised by the unsettled nature of the border.

Turning away from the boundary issue, the Xi visit was significant for a number of reasons.

First, the Chinese offer of $20 billion in investment, while less than the $35 billion promised by Japan, represents a quantum leap over the $400 million that China has invested in India so far. The fact that this sum has largely been earmarked for Chinese industrial parks in Gujarat and Maharashtra increases the likelihood of it materializing. There has also been a whole range of economic initiatives, ranging from the Chinese commitment to rebalance bilateral trade by reducing the obstacles Indian exporters face to exploring high-speed rail projects.

Second, the MoU on space cooperation marks a change in the Chinese attitude towards working with India in ‘sensitive’ technological areas. Third, the proposed maritime cooperation dialogue that is now targeted to begin this year will provide a platform for India to underline the importance of freedom of navigation, including in waters that are disputed such as the East China and South China seas.

Fourth, Xi Jinping broke new ground during his speech to the Indian Council of World Affairs when he spoke about India and China working as partners for the creation of “Asia-Pacific security and cooperation architecture that is open, transparent, equal-footed and inclusive.” It has taken eight years since Hu Jintao and Manmohan Singh first agreed in 2006 “to explore a new architecture for closer regional cooperation in Asia” for a top Chinese leader to speak openly and warmly of India and China as “twin anchors” for this pan-Asian project.

All of this, plus the personal chord that the two leaders struck with each other, especially in Ahmedabad, provides ample room for India and China to take their relation to a higher level.

Of course, it is essential that the Prime Minister, who has inexplicably delayed appointing his Special Representative for talks with China, quickly name someone to the job so that the SR dialogue can resume. This is the best way the concerns he expressed about the border issue and the Joint Statement’s call to treat the “early settlement of the boundary question” as a “strategic objective” can be acted upon in earnest. In political terms, Narendra Modi and Xi Jinping are the strongest leaders India and China have had in over 30 years. They may well have a five-year window to deliver something their predecessors have failed to do but political time does have a way of flying faster than a normal calendar. There is not a minute to lose.

This entry was posted on September 19, 2014 by Siddharth Varadarajan in China, Indian Foreign Policy.