So now we know the Modi wave which propelled the Bharatiya Janata Party to power nationally has not carried over to state-level contests. That apart, there are six other take-aways from Tuesday’s by-election results (32 assembly seats in eight states) that are equally, if not more, important for the future course of Indian politics.

The loss of eight seats in Uttar Pradesh, the state where the BJP went out of its way to rake up divisive issues like the ‘love jihad’ hoax, ought to have sent a message to the party high command that communalism does not pay. But there will be enough Sangh Parivar hot 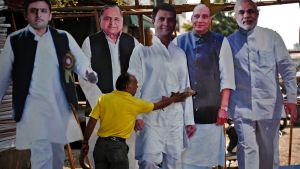 heads in UP, Nagpur and Delhi who will argue the opposite: that the party erred in not being even more aggressive in its “pro-Hindu” campaign. These elements will argue that this is why many Hindu voters—including Dalits, whom the BJP was hoping to attract in the absence of Bahujan Samaj Party candidates—chose to repose their faith in the “pro-Muslim” Samajwadi Party. They will argue that where there was not only overt communalization but violence as well—as in Saharanpur—the BJP was able to retain its seat. For Sangh hardliners, Modi’s call for a “10-year moratorium” on communalism is meaningless since they do not believe their agenda and methods are communal. The prime minister’s silence in the face of the anti-Muslim rhetoric of his party colleagues suggests his own definition of what constitutes communalism might also be at variance with the national consensus.

The SP’s gains in UP appear temporary

Mayawati’s decision to avoid putting up any BSP candidates in the by-elections might have been motivated by her desire to ensure the defeat of the Samajwadi Party but the consolidation of anti-BJP votes this led to actually helped the SP romp home. If in Bihar, opposition unity was created by design, in UP it appeared by default. The results certainly highlight the vulnerability of the BJP to a united opposition—a point RJD chief Lalu Prasad made to both the BSP and SP last month and which SP leader Mulayam Singh accepted—but the chances of Mayawati burying the hatchet are considered close to zero. In the run up to the 2017 assembly elections and the 2019 Lok Sabha elections, therefore, the BJP can be fairly confident about facing a divided opposition. In a three-cornered contest, the BJP would not do as badly as it did in these by-elections.

Narendra Modi’s position within the Sangh Parivar has been strengthened

The failure of the BJP in UP and its weakening in Gujarat and Rajasthan may mean there is no ‘Modi wave’ but it also reinforces the idea that the party organization has no other crutch to lean on. The party’s spokespersons have dutifully reminded us all that the Prime Minister did not campaign this time and that by-elections are not fought on ‘national’ issues. The sub-text of this readout is that Anandiben Patel and Vasundhara Raje need to carry the can for Tuesday’s seat losses in their states themselves and that the supreme leader himself cannot be blamed. As for UP, despite the failure of NaMo-acolyte Amit Shah and his hand-picked chief campaigner, Yogi Adityanath, there are enough political variables in the mix for Modi to emerge unscathed and even stronger.

The BJP cannot easily dictate terms to its allies

The BJP has a majority of its own in the Lok Sabha and Modi may still retain his national cachet, but the party is slowly realizing that the quest for power in the states revolves around the strength of its provincial leadership and the local alignment and balance of political forces. The BJP’s high-handedness in dealing with allies has already driven the Haryana Janhit Congress of Kuldeep Bishnoi away. In Maharashtra, much to the BJP’s consternation, the Shiv Sena has said it plans to contest the lion’s share of seats in the upcoming assembly elections and that Uddhav Thackeray will be the National Democratic Alliance’s chief minister.

While BJP president Shah has been talking tough, the party’s poor showing on Tuesday has surely reduced his bargaining power. As an editorial on the results in Saamna, the Sena’s organ, bluntly advised the BJP: “Don’t let success go to your head, keep your feet on the ground.”

The BJP will look to make inroads in eastern India

The victory of one assembly seat each in West Bengal and Assam may not compensate the BJP for its losses in UP, Rajasthan and Gujarat but it will encourage those within the party organization who have been arguing for a ‘look east’ policy. The three major eastern states—West Bengal, Assam and Odisha—account for 77 Lok Sabha seats. The weakening of the Left Front in West Bengal, the dissipation of the Asom Gana Parishad in Assam and the decimation of the Congress in Odisha opens the door for the BJP to make major inroads here. In Bengal, not only did the BJP wrest the Basirhat South seat from the CPI(M) but the latter’s candidate ended up losing his deposit. And though Trinamool comfortably won Chowringhee, the BJP came second there.

The Congress does have a young leader who can produce results

While the Congress vote in UP collapsed, the party can take comfort from the fact that it wrested three seats from the BJP in Rajasthan barely 10 months after suffering its worst-ever defeat in the state. While the reserved seat of Weir fell into the lap of the Congress because the BSP, which won a quarter of the votes in 2013 chose not to contest, Surajgarh and Nasirabad registered solid swings towards the party. The fact that the man in charge of the Congress campaign was Sachin Pilot will strengthen the belief that if the party wants to have any hope of staging a political comeback at the national level, it has to be on the basis of a younger leadership with a proven capacity to deliver results.

This entry was posted on September 18, 2014 by Siddharth Varadarajan in Indian Politics.