Friendship With Russia Comforts, Even if it Doesn’t Electrify 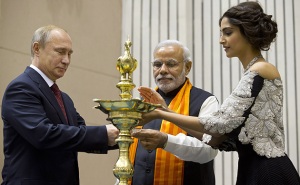 11 December 2014
Friendship With Russia Comforts, Even if it Doesn’t Electrify
Siddharth Varadarajan
At the heart of the decades-old partnership between Russia and India is a reality that neither the end of the Cold War nor the advent of unabashed capitalism in both countries has so far managed to change: Moscow will always be more willing to provide things that New Delhi may ideally like to buy from the West but is not able to because of the latter’s reluctance.

Back in the day, it was steel plants and giant turbines, military aircraft and tanks; then it was nuclear reactors and fuel. Today, it is nuclear submarines, outer space and rocketry, and the prospect of technology transfer in the civil nuclear energy field.

Of course, this partnership has never been strictly transactional. Russia stood by India whenever it was under pressure regionally or internationally, while India too would do what it could to watch Russia’s back. Moscow was a solid ally through all of India’s wars; and though India made known its disapproval of the former Soviet Union’s invasions of Hungary, Czechoslovakia and even Afghanistan, it refused to join the West in isolating Moscow. And the same is true for today.

“India and Russia”, the vision document released by Narendra Modi and Vladimir Putin at the end of their summit meeting on Thursday says bluntly, “oppose economic sanctions that do not have the approval of the United Nations Security Council,” a clear reference to Washington’s efforts to squeeze Moscow over the latter’s intervention in the Ukraine.

The document also speaks of enhanced cooperation in the fields of nuclear energy, defence trade and manufacturing, and the peaceful use of outer space.

No doubt the passage of time has grafted new and significant elements to this bilateral relationship. And the US has now emerged as the largest supplier of military hardware to India. But broadly speaking, the strategic logic of Indo-Russian ties in 2014 is not very different from what it was one, two, four or even five decades ago.

As Modi noted in his remarks to the media at the end of the summit, India today has wider options in some of those areas, especially defence. But, he said, Russia would continue to remain its most important partner. This is essentially because Moscow gives what others don’t. Critical assistance for India’s nuclear submarine programme, for example.

The main statement and a parallel document outlining the ‘strategic vision’ for cooperation in the civil nuclear energy front reiterate earlier plans for a total of 12 Russian reactors to be built at Kudankulam and another (yet to be identified) site in India. What is new, however, is the commitment to “progressively and significantly enhance the scope of orders for materials and equipment from Indian suppliers and establish joint ventures, including by transfer of technology, as mutually agreed. This will include manufacturing of both main equipment and spares, with special priority for spares, for Russian-designed nuclear power units in India.”

The document also envisions the export of such components to third countries. The proposed Joint Working Group on the Nuclear Fuel Cycle is likely to pursue cooperation in areas like spent fuel management, reprocessing, etc., areas the US and French are reluctant to venture.

Never before has a meeting between India and Russia generated as much international interest as this week’s summit. Relations between the West and Moscow are the lowest they have been for years, thanks to Western sanctions. India, on the other hand, is a country everyone seems anxious to embrace, especially given the excitement Modi has triggered among international investors.

What was left unsaid in the run-up to Thursday’s meeting was the Western hope that India would try and put some strategic distance between itself and Russia. The Indian government may have had misgivings over Crimea’s secession from Ukraine but has baulked from airing these publicly.

And while Moscow’s interference in Ukraine is certainly a cause for concern here, as is the intransigence of hardline elements in Kiev, strategic challenges in South Asia, West Asia, the wider Asia-Pacific region have reinforced the importance of Russia for India.

India and Russia will continue to provide political comfort to one another on major global issues but is there scope for genuine excitement in the economic sphere? Modi and Putin are trying to push cooperation in the field of diamonds and hydrocarbons but Russia is too far for there to be any viable pipeline link. Business-to-business ties are a fragile link in the bilateral relationship, and people-to people relations the weakest.

Unless Moscow and New Delhi are able to find innovative ways of marrying India’s human capital endowments with Russia’s comparative advantage in the fields of mathematics, science and engineering, the West will remain a more exciting — if expensive — source of technology. Defence, nuclear and space cooperation remain, but these will only be relevant so long as Russian technologies in these fields are.

Disclaimer: The opinions expressed within this article are the personal opinions of the author. NDTV is not responsible for the accuracy, completeness, suitability, or validity of any information on this article. All information is provided on an as-is basis. The information, facts or opinions appearing in the article do not reflect the views of NDTV and NDTV does not assume any responsibility or liability for the same.

This entry was posted on December 11, 2014 by Siddharth Varadarajan in Indian Foreign Policy.