A weakness born of bad intent 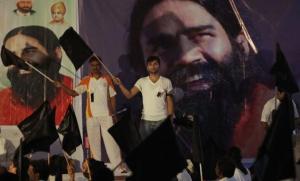 A weakness born of bad intent

Like millions of others across India, I have spent the past week repelled by the spectacle of a weak government entering into improbable contortions over the naive and somewhat bizarre demands of Baba Ramdev. And when the “toughness” followed in the early hours of Sunday, it came in a typically cowardly fashion — with police action in the dead of the night against unarmed supporters who did not pose an immediate or even potential threat to law and order in Delhi. Kapil Sibal, the government’s chief negotiator, said permission to assemble at the Ram Lila grounds had been granted for yoga exercises and not politics. But people in India have the right to assemble peacefully and to put forward political demands if they so wish. If tomorrow, the organisers of a classical music concert in Nehru Park put up a banner demanding a strong Lokpal Bill, will it be OK for the police to wade in?

The fact that the Manmohan Singh government swung from abject capitulation to unnecessary confrontation in less than 48 hours does not surprise me. Its credibility on the issue of corruption is at an all time low. The pressure it is under has blunted its political instincts. However, sending four senior ministers to the airport to welcome the yoga instructor-turned-upstart politician and then hundreds of policemen to extern him were both acts of gutlessness which the Congress party will find hard to live down. Particularly when the Baba was not even serious about the issue of black money.

Everybody with any sense agrees that corruption is a serious issue and that all efforts must be made to end the curse of black money. But it is meaningless and even nonsensical to demand the framing of a new law to confiscate black money when we do not know where this money is, how much it consists of and who it belongs to. If the authorities had this information, they would be legally empowered to seize the funds and place their owners behind bars. But the passage of a new law will not make the gathering of this information any easier. Either the Baba is not a very serious person or he has allowed emotion and his broader political ambitions to cloud his judgment. Which is surely not a good thing for someone well versed in yoga.

The problem of corruption is not simply one of law but of will. The hold of black money over the economic and political system of India cannot be ended so long as the government lacks the political will to actually crack down on the printing press which generates it: corruption. Defined broadly as the abuse of political and corporate power for personal gain, corruption is the glue which binds this country’s political and economic elite at every level of governance from the block and district up to the Union. Corruption is not an abstraction. Every crore that a politician or bureaucrat may have secreted away as “black money” in Switzerland or elsewhere is organically linked to the tens of crores of rupees in both “black” and “white” money outside and inside India that businessmen generate by getting favourable treatment. Corruption was an integral part of the “license-permit raj” of Nehruvian socialism. But it has grown to frightening proportions in our liberalised free market economy. Politics and business have come so close together today that it is sometimes hard to tell the two apart.

Any serious campaign against corruption by civil society or politicians, Babas or babalog must zero in on the system which generates illegal gains for those with power, influence and money. Such a campaign must demand that action be taken against those individuals who have abused their authority or sought to subvert laws and procedures for personal gain. But Ramdev’s campaign was not about this at all. Which was why the government was also quite happy to engage with him in what it knew would be a meaningless exercise.

While there is always room for legislative clarity in the definition of offences, the implementation of any new law will remain a prisoner to this lack of political will unless it allows for independent investigation and prosecution. A strong Lokpal Bill may help remedy the situation somewhat but only if the ability of the government to interfere with the investigation or punishment of well-connected individuals is ended. Here, it is instructive to see what happened in a recent case decided by the Lokayukta for the Delhi government, Justice Manmohan Sarin.

In the same week that the UPA government agreed to discuss the entire system of taxation, finance, administration and education in the country with Baba Ramdev, its stiffness of resolve in protecting a junior politician accused by the Lokayukta of abusing his authority seems to have passed almost unnoticed.

The case concerned a Delhi minister, Raj Kumar Chauhan, who sought to interfere with the tax inspectors even as they were conducting a raid at the premises of a private establishment. A complaint against the minister was filed by a senior IAS officer, Jalaj Shrivastava, who was a tax commissioner at the time. After conducting an inquiry, which included collecting testimony on oath from the officers concerned, Justice Sarin found that the minister had indeed abused his authority on behalf of a private party. But his recommendation that Mr. Chauhan be sacked and proceeded against was rejected by the President of India on the advice of the Union Ministry of Home Affairs. Evidently, the MHA found Mr. Chauhan’s explanation — that the telephone call he placed during the raid was nothing other than the routine expression of concern for a constituent — to be more credible than the exertions of the Lokayukta or of the upright bureaucrats who put their future career prospects on the line by becoming whistle-blowers.

The protection afforded to the Delhi minister, who is fairly low down in the Congress party’s food chain, shows the extent to which the “system” is programmed to circle its wagons at the first sign of trouble. Even if one dismisses this example because the Lokayukta is still a young institution, what explains the continuation of Vilasrao Deshmukh in the Union Cabinet despite the Supreme Court holding him guilty of abusing his authority when he was Chief Minister of Maharashtra? Mr. Deshmukh had intervened on behalf of a usurious moneylender against whom some peasants wished to file a police complaint. Instructions to go easy were phoned in to the police station concerned, which diligently made a record of the call in its daily log book. A system that is keen to stamp out the abuse of authority — which lies at the root of all corruption — would ask Mr. Deshmukh to leave the Cabinet now that his culpability has been confirmed by the highest court. But, alas, the UPA does not run such a system. Mr. Deshmukh got promoted to a more powerful ministry. And instructions have been sent out to all police stations in Maharashtra that they should no longer make a record of every phone call they receive from ministers.

If Baba Ramdev were really serious about fighting corruption, he would have hit the UPA hard at the places it was most vulnerable instead of trying to build his own political constituency through shadow boxing against imaginary foes like the Cayman Islands and the 1000 rupee note. As for the Bharatiya Janata Party and RSS, which have tried to fire from the Baba’s shoulder, the less said the better. Why is it that L.K. Advani, who was the second most powerful man in India for six years from 1998 to 2004, woke up to the problem of black money only after his government was voted out of power? If there is a lesson from the farce that has been enacted in Delhi this past week, it is this: there is no room for abstraction. Instead of demanding the “return of black money,” let us ask the government why it has not signed an agreement with Switzerland of the kind the European Union has for the repatriation of taxes that the Swiss levy on interest earned by foreign account holders. Instead of the death penalty for the “corrupt,” let us ask why the Prime Minister is so slow to act against ministers who abuse their authority. Let us push for a strong and empowered Lokpal whose recommendations cannot be thrown into the dustbin.

3 comments on “A weakness born of bad intent”

This entry was posted on June 7, 2011 by Siddharth Varadarajan in Indian Politics.