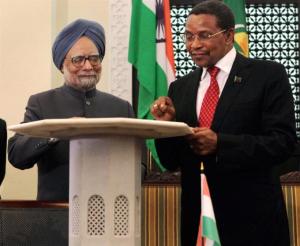 Tanzania was the second stop in Manmohan Singh’s first proper visit to Africa in seven years. My diary of a brief but memorable visit …

Dar es Salaam: Indian officials have spent the past week fighting off Western suggestions that they are in a race for influence in Africa with the Chinese. On Friday, their claim that India and China complement one another was endorsed by President Jakaya Kikwete of Tanzania, who gave a concrete and unscripted example of how the specific skill sets the two Asian powers possess has worked to the advantage of his people.

Speaking to reporters at a joint press conference with the Indian Prime Minister on Friday, Mr. Kikwete said that Tanzania lacked the capacity to provide a whole range of treatments at home, including heart surgery and care for cancer and renal diseases. A few years ago, his government sent 29 doctors and nurses to India for specialised cardiac training and now they have returned and are performing open-heart surgeries in the country for the first time. The Chinese have pitched in with an offer to help build a 200-bed hospital. “So the Indians have helped to train our people and Chinese have helped to build the hospital where they will work”, Mr. Kikwete said.

From Apollo to space

Tanzanians spend nearly $80 million every year on medical treatment abroad, including in India, so when the Apollo Hospitals group from India announced its intention of setting up a specialty hospital here, the Tanzanian government jumped at the chance. The $150 million project will be a joint venture between Apollo, the Tanzanian Health Ministry and its National Social Security Fund, with the Tanzanians providing the land and building, and the Indian side the equipment and doctors. An MOU was signed by Apollo chairman Prathap C. Reddy in the presence of Dr. Manmohan Singh and Mr. Kikwete.

Apollo’s plan is to develop their Dar es Salaam hospital as a hub-and-spoke model with smaller clinics in 14 countries across the eastern African region. Though the details of the project have yet to be worked out — including Apollo’s social obligations — President Kikwete said there would also be a training component so that Tanzania’s long-term health-care capacity gets augmented.

Speaking later at a function to inaugurate the India-Tanzania Centre of Excellence in Information and Communication Technology at the Dar es Salaam Institute of Technology, Dr. Singh spoke about taking this capacity-building to the stratosphere: “I would specially like to announce our readiness to cooperate with Tanzania in the area of space technology and applications”, he said. Though he probably had satellites in mind, India should consider offering to eventually send the first African into space as part of its own manned mission project. Such an offer would fire the imagination of a continent that India regards as an emerging economic — and strategic — pole of the international system.

When Indira Gandhi came to Dar es Salaam in 1974, she gifted Mwalimu Julius Nyerere a peacock and peahen from India. There are today 14 peacock nests around the State House. The last time Dr. Singh came to Tanzania was in the late 1980s, when he was secretary-general of the South Commission, an independent body set up by the Nonaligned Movement with Nyerere as its chairman. Their exertions were, unfortunately, not as productive as that of Mrs. Gandhi’s poultry. The collapse of the Soviet Union and the advent of neoliberalism undermined this unique project of the Global South even before it got off the ground. Tanzania abandoned Ujamaa, its system of socialism, and India embraced liberalisation.

Twenty years later, however, even under the new economic paradigm the two countries have embraced, the need for South-South cooperation is being felt more than ever before. The only difference now is that the process is being driven as much by private capital as by the state, though often the two are in close partnership. Apollo officials told The Hindu that once their hospital project’s details are settled, they may consider approaching the Indian government for access to a part of the $5 billion line of credit which has been set up for Africa. Tanzania is also keen to promote investment in its agricultural sector. Millions of hectares are available for long-term lease and contracts have been signed with European and Saudi firms. But unlike in Ethiopia, these lands are not always vacant. Which is why the Indian High Commission has not encouraged Indian companies to get into farming here.

The city of peace

Wrapped around a natural harbour that is deep enough to allow massive container ships to gently sail at shouting distance from its colonial-era government quarter, Dar es Salaam is an attractive city that has all the charm of a bustling port without the menace and chaos one normally associates with cities like Mumbai and Karachi across the Indian Ocean. Traffic jams are a major problem — the bureau chief of the East African newspaper said he would rather leave for work at 6 a.m. than put up with a three hour commute. Amazingly, however, road discipline appears to be maintained at all times, even when cars are backed up for miles on undivided roads and the oncoming lanes are empty.

The 1990 report of the South Commission noted that because “the South doesn’t know the South … we have been compelled to commit our own errors, unable neither to learn from the experience of the others in similar situations nor to benefit from other’s positive experiences”. Mr. Kekwete said he looked to India for technology and investment. Manmohan Singh graciously added that as Tanzania developed, he hoped Tanzanian companies might also come and invest in India. However, one thing Tanzania could offer to teach Indians right away is traffic sense.

This entry was posted on May 28, 2011 by Siddharth Varadarajan in Africa, Indian Foreign Policy.