Reprocessing talks with U.S. to begin next week 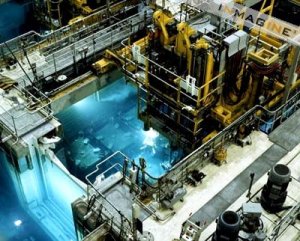 U.S.-prepared draft handed over earlier this month will be basis for talks… July 2010 is the deadline by which an agreement must be concluded…

Reprocessing talks with U.S. to begin next week

New Delhi: With the fate of billions of dollars of reactor sales riding on the outcome, India and the United States will begin formal negotiations next week on the conditions under which American-origin spent nuclear fuel will be reprocessed within the country.

The talks, which get rolling in Vienna on July 21, are aimed at finalising the “arrangements and procedures” under which the spent fuel generated by U.S.-supplied reactors will be reprocessed. The reprocessing is to be done in the new safeguarded facility India agreed to build in its nuclear cooperation agreement with the U.S, also known as the 123 agreement.

Under the terms of the agreement, Washington will have until July 21, 2010, to reach an understanding with Delhi once the negotiations commence. The one-year deadline was insisted upon by India with the negative experience of Tarapur in mind. Decades after the U.S.-supplied reactor there became operational, India is still waiting for America to make the “joint determination” necessary for the reprocessing of accumulated spent fuel to begin.

According to a senior official from the Ministry of External Affairs, India will be represented in the talks by a five-member technical delegation headed by R.B. Grover, while Richard Stratford, the State Department’s top negotiator on nuclear energy matters, will lead the U.S. side. Like Dr. Grover, Dr. Stratford is a veteran of the complex and difficult negotiations that followed the signing of the Indo-U.S. nuclear deal in July 2005, especially the 123 agreement.

Indian officials said a U.S.-prepared draft handed over earlier this month will be the basis for the talks. The brief for the Indian delegation is also clear: Prime Minister Manmohan Singh had assured Parliament in 2006 that the country would only accept standard IAEA safeguards on its civilian facilities. The problem is that IAEA procedures are themselves changing as the technology for measurement precision evolves. Safeguards on the Rokkasho-Mura plant in Japan, for example, involve the use of expensive monitoring equipment, all of which the U.S. got the Japanese to pay for. All told, the negotiations are expected to be “tough but doable.” One major Indian concern is irreversibility: what the country does not want is a situation where Washington terminates consent on some ground.

Although a senior U.S. official, Robert Blake, was quoted on Thursday as saying the reprocessing talks would begin only after India files a declaration with the IAEA on its facilities to be safeguarded, South Block officials said the declaration as envisaged by paragraph 13 of the safeguards agreement would likely be made some time later. They also said there was nothing in any Indo-U.S. agreement to imply linkage.

The declaration will consist of the list of civilian nuclear facilities India will place under safeguards. Officials confirmed that a draft declaration has been prepared and is undergoing internal vetting. When filed, however, the individual facilities listed will only come under IAEA inspection after separate notifications are filed and the concerned facilities added to the safeguards annexe one by one.

Indian officials say the notifications process is still some distance away, since facilities will be placed under safeguards only when lifetime fuel supply arrangements have been tied up for them.

This entry was posted on July 19, 2009 by Siddharth Varadarajan in Nuclear Issues.