No ‘sell-out’ at Sharm-el-Sheikh 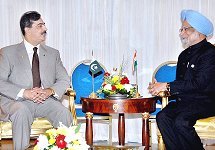 Better drafting may have spared us some of the confusion we’ve seen since the July 16 meeting between Prime Minister Manmohan Singh and his Pakistani counterpart, Yousaf Raza Gilani. but that is the price India and Pakistan must pay for traveling half-way around the world for hurried conversations that ought to be conducted in a more leisurely manner back home…

No ‘sell-out’ at Sharm-el-Sheikh

New Delhi: Going by the hyper-reaction the Sharm-el-Sheikh meeting between Prime Minister Manmohan Singh and Yousaf Raza Geelani has generated in India as well as Pakistan, it is evident that the joint statement they issued could not have gone much further than it did in addressing either country’s core concerns.

The Pakistani delegation came to the meeting with its tails up, still smarting from the inadvertent slight Dr. Singh delivered to President Asaf Ali Zardari at their encounter in Yekaterinburg. What Mr. Gilani and his entourage wanted more than anything else was the resumption of the composite dialogue process, suspended by India in the wake of last November’s terrorist attacks in Mumbai.

In the run-up to the meeting, New Delhi had asked for and received a written communication from the Pakistani government detailing the results of the investigation it had conducted. One week later, this dossier is still apparently being “evaluated” but Foreign Secretary Shiv Shankar Menon told reporters it confirms the involvement of about a dozen Pakistani nationals and also names “one or two organisations.”

Whether a credible prosecution is now mounted or not, it is clear the present government in Islamabad has gone further than any of its predecessors in acknowledging the fact that Pakistani nationals and organisations had used Pakistani territory to plan and launch a terrorist strike in India.

These admissions came as a result of sustained pressure from India and the international community after Mumbai and were made in the teeth of opposition from hardline elements within the Pakistani establishment that have still not made up their mind about the need to end the policy of using jihadi terror as a force multiplier against India.

In January 2004, on the basis of nothing more than an assurance from General Pervez Musharraf that Pakistan’s territory would not be used to launch terrorist strikes on India, the erstwhile BJP-led National Democratic Alliance government took the major step of restarting the composite dialogue.

That joint statement may not have said so explicitly but it was predicated on the kind of “delinking” of terror and talks that the BJP now describes as a “capitulation.” The reality is that Prime Minister Manmohan Singh, despite his personal commitment to the need to engage with Pakistan, has actually been far more cautious in Sharm-el-Sheikh than Atal Bihari Vajpayee was in Islamabad.

After all, the Zardari-Gilani duo has delivered more than the empty assurances Mr. Vajpayee brought back with him to Delhi. And in exchange, much to the chagrin of his Pakistani interlocutors, what Dr. Singh is willing to offer is not immediate resumption of the composite dialogue but only the possibility of this at a later date.

Given the hostility with which the joint statement has been received in India, the Pakistani side would now have a slightly better understanding of the political constraints Prime Minister Manmohan Singh faces as he tries to move the peace process forward. Similarly, some of the phrasing in the July 16 joint statement is a reflection of Dr. Singh’s understanding of the constraints which the civilian leadership in Pakistan faces as it battles with a military-intelligence establishment that fears the loss of its domestic influence and power if the jihadi networks are rooted out.

Mr. Gilani, for example, brought some of the arguments of his hawks to the meeting, such as their allegation of Indian involvement in the secessionist movement in Balochistan. The joint statement records the fact that he raised the issue and this, presumably, will give ballast to the civilian leadership. It does not say India concurred, let alone admitted to any involvement. The statement does not even say India was willing to discuss the matter bilaterally. That offer was actually made by Dr. Singh in his press conference later in the day because, he said, New Delhi had nothing to hide. Yet, some in India are interpreting this innocuous reference as an admission of guilt. The only thing more fanciful is the opinion of some Pakistani hawks that by mentioning Balochistan in the statement, Prime Minister Gilani has “internationalised” an internal issue.

Apart from misplaced ire on the ‘B-word,’ the joint statement formulation that has excited the greatest amount of nervous excitement in India is this: “Action on terrorism should not be linked to the Composite Dialogue process and these should not be bracketed.” What this means is that action on terrorism must follow its own logic: No civilised society can allow its soil to be used for the planning and perpetration of terrorist acts on a neighbour. And that the composite dialogue process must also proceed on the basis of both sides engaging with each other for mutual benefit. Tomorrow, if a resumed dialogue process deadlocks on Siachen or some other topic, Pakistan should not use that as an excuse to resile from its obligation to fight terror. But implicit in this delinking is the controversial notion that India must not suspend the composite dialogue because it feels Pakistan has not taken enough action against terrorism. India has always made this link in the past. And Dr. Singh’s statement that meaningful dialogue is possible only if the Mumbai perpetrators are brought to book makes it clear India does not intend to delink the two in the future either.

The weakness of this formulation is not that there should be no linkage but that unidirectional linkage is not possible. The political reality is that there can be no meaningful dialogue between India and Pakistan if the latter does not act firmly and credibly against terrorism. Islamabad cannot expect Delhi to begin the composite dialogue when the latter does not believe it has delivered on its commitments. Equally, the Indian side must realise that sustained Pakistani action against terrorism cannot occur in a diplomatic vacuum. Constructive engagement allows rational elements within the Pakistani system to demonstrate that dismantling the infrastructure of terrorism can produce tangible gains and not just pain.

Better drafting might have allayed some of the misplaced anxieties we have seen on both sides of the border but this is the price India and Pakistan must pay for running halfway around the world for brief meetings on the sidelines of other events. At Sharm-el-Sheikh, the two Foreign Secretaries laboured under both the barrel of television cameras with their insatiable appetite and rolling deadlines and the clock of multiple appointments the two Prime Ministers had with other world leaders. One lesson to be learned from this experience is that the forthcoming meetings between the two sides should be conducted in a calmer manner, preferably in each other’s capitals, so that the concerned officials have ample time to discuss and work out their apprehensions. Following a “normal” routine of meeting rather than tailing the multilateral events calendar might also have allowed India to properly study Pakistan’s Mumbai dossier before the two Prime Ministers met. And that might well have produced greater clarity, if not a bigger breakthrough.

For despite the cries of “sell-out,” it is the status quo ante of a suspended composite dialogue that still prevails after Sharm-el-Shaikh, with the prospect of resumption kicked down the road. “Whether, when and in what form we broaden the dialogue with Pakistan will depend on future developments,” Dr. Singh told Parliament on Friday. It is now up to both sides to make those future developments happen.

6 comments on “No ‘sell-out’ at Sharm-el-Sheikh”

This entry was posted on July 18, 2009 by Siddharth Varadarajan in Indian Foreign Policy, Pakistan, Terrorism.