Obama and Modi Have Taken Big Steps. What Next? 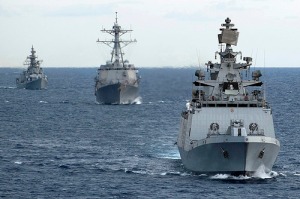 Obama and Modi Have Taken Big Steps. What Next?

Barack Obama and Narendra Modi came to their second summit meeting in four months with a singular aim: how to take the strategic partnership between India and the United States to a higher level. Based on what was accomplished on Sunday, it is fair to say the two leaders accomplished this in large measure.

If the lengthy joint statement they issued seemed somewhat insipid and repetitive, this is because the real action was hidden away in two side documents of great strategic significance, the ‘US-India Joint Strategic Vision for the Asia-Pacific and Indian Ocean Region’ and the new ’10-year Framework for the US-India Defence Relationship.’

The Asia-Pacific and Indian Ocean Region statement is the first act in what may be the eventual fusion of Modi’s ‘Act East’ policy and Obama’s ‘Asia pivot’, as envisaged in September 2014 year when the two leaders met in Washington.

The statement says that “a closer partnership between the United States and India is indispensable to promoting peace, prosperity and stability” in the wider region. While that sounds unremarkable, what follows is a clear warning shot across the bows of a China that Modi has described as “expansionist” and that the U.S. is attempting to box in by its re-energised focus on partnerships in Asia.

The statement says, “We affirm the importance of safeguarding maritime security and ensuring freedom of navigation and over flight throughout the region, especially in the South China Sea. We call on all parties to avoid the threat or use of force and pursue resolution of territorial and maritime disputes through all peaceful means, in accordance with universally recognized principles of international law, including the United Nations Convention on the Law of the Sea.”

Last year’s joint statement used similar language and drew a sharp response from Beijing to the effect that third parties need not concern themselves with territorial disputes in its backyard. The fact that this formulation is now a key part of a joint strategic vision for the Asia-Pacific suggests New Delhi is willing to play its part in Washington’s emerging “rebalance to Asia”.

On the defence side, the centerpiece of the new relationship is the Defence Technology and Trade Initiative under which the two countries will pursue co-production and co-development on four ‘pathfinder’ projects that might pave the way for others. There will also be a working group to explore aircraft carrier technology sharing and design.” As Chuck Hagel, the US Secretary of Defence puts it, “By establishing a new military education partnership, we will help shape the next generation of military leaders in both our nations, fostering relationships that will draw our defense establishments closer together for years to come.”

Moving the strategic relationship on to a higher plane presupposes the resolution of older problems – and the two issues that had defied easy handling till now were the US demands for national flagging and tracking of US-obligated nuclear material in India, and for a change in India’s nuclear liability law.

On both questions, Obama said on Sunday that there had been a “breakthrough understanding.” Modi said the door was finally open for the commercial stage of the nuclear deal between India and US to begin.

The demand for tracking nuclear material was first raised by the US in 2012 during the “administrative arrangements” negotiation for implementation of the bilateral nuclear cooperation agreement with India (the ‘123 agreement’). Contrary to public perception, this demand is not a requirement of American law. Indeed, in November 2011, three crucial government departments in the US – the Nuclear Regulatory Commission, the Department of Energy and the State Department – had taken an official position against the intrusive tracking of US-obligated fuel overseas. This was in response to criticism by the US Congress’s General Accounting Office which faulted American efforts to monitor and evaluate the security of US nuclear materials around the world. The State Department view was that there were “sovereignty issues” involved and that the demand for intrusive tracking would affect the US’s bilateral relationships.

During the 123 agreement negotiations, India had refused American demands for a parallel inspection regime and insisted that only the International Atomic Energy Agency would be allowed to inspect civilian reactors. Manmohan Singh had even declared in parliament that US inspectors would never be allowed to “roam around” Indian reactors. The concern on the Indian side in 2012 when the new demand was made was that if the US were now to be allowed to track its nuclear material as part of administrative arrangements, this would adversely affect hard-won Indian rights under the 123 and reprocessing agreements. And that eventually the integrity of the Indo-US nuclear deal would be fatally compromised.

By holding fast to an offer India made in 2013 of allowing the IAEA to share some of the results of its inspections with the US – an offer that was also made to and accepted by Canada as part of its administrative arrangements for nuclear sales to India – the Indian government was able to ensure Washington backed off on its demand for tracking. With this issue out of the way thanks to Obama telling his negotiators to back off, India will now have an easier time finalising nuclear cooperation agreements with Japan and Australia.

On the liability front, US objections centred around two provisions of the Indian Civil Liability for Nuclear Damage Act that exposed US suppliers to potential damage claims in the event of an accident. The first provision, Section 17(b), gives the Indian operator — who has strict, no-fault liability for any accident – the right to recover damages from his supplier if the accident was caused by defective equipment or services. The second provision, Section 46, preserves the right of nuclear accident victims to file tort claims against those responsible, be they the operator of a nuclear plant or the supplier of the reactor. These provisions were not put in out of pique but to ensure suppliers internalized the cost of an accident while deciding what the optimum level of safety would be in the plants they were planning to sell to India.

With US vendors fearing exposure to potentially unlimited damages over the lifetime of the reactor, the Obama administration spent the better part of three years demanding the Indian law be amended to remove these “offending” sections. The Manmohan Singh government refused to do so, but did offer to soften the liability blow on suppliers via administrative rules. With those rules cutting no ice with US suppliers, the Modi government has now chosen to find other creative ways of accommodating American concerns without amending the statute.

Its proposal for a publicly-funded insurance pool to indemnify suppliers against claims under Section 17(b) for a nominal premium appears to have satisfied US vendors, but there is still no clarity about the “understanding” that has been reached over Section 46. The Indian officials who briefed reporters on Sunday night were reluctant to provide details on what kind of an assurance India had given the US – the furthest one official was prepared to go was to call this a “work in progress” – but US ambassador Richard Verma was a little more forthcoming. “We think we came to an understanding of the liability issue,” said Verma, and that it will operate “through a memorandum of law within the Indian system.” He added that while the governments had agreed to this, “it’s up to the companies to do their own risk assessment.

In the absence of more information, it would appear that India intends to keep the text of the law intact but “read down” the meaning of Section 46 via a clarificatory memorandum that someone like its Attorney General would issue so that suppliers are removed from the ambit of tort claims. Is an eventual change of the law part of the undertaking? Indian officials insist not, but the US ambassador said that the memorandum is not something that would “require at this stage a legislative undertaking.” (emphasis added) Does this mean that there will come a stage where the US would expect a legislative undertaking?

The fact is that in the Indian system, only Parliament or the courts are empowered to read down a provision of law. As it stands, Section 46 preserves the right of victims to sue those responsible for a nuclear accident. If Westinghouse is willing to accept an assurance from the Attorney General that no such right exists, this would allow the Modi government to say a solution has been found within the four walls of the Indian law. But if the text of Section 46 is to remain the same, the company surely owes an explanation to its shareholders for why it wasted three precious years insisting the section be amended.

Prime Minister Modi too needs to explain the nature of his undertaking to the US. Is he no longer willing to uphold the legal rights of potential victims of a nuclear accident, rights that his own party vigorously defended when the liability act was being drafted?

In 1987, the government of India sold the victims of Bhopal down the river three years after the country’s worst-ever industrial accident, agreeing on a figure of $470 million from Union Carbide as full and final settlement. Many of those victims continue to languish without adequate relief or care to this day. The Fukushima nuclear accident has already cost the Japanese government close to $20 billion. If the Modi government is today willing to sign away the rights of the people of India for compensation from a nuclear accident before it has even happened, is it willing to formally enshrine the principle of adequate public compensation for victims in law?

Either way, the controversy over nuclear liability is not likely to go away soon.

Disclaimer: The opinions expressed within this article are the personal opinions of the author. NDTV is not responsible for the accuracy, completeness, suitability, or validity of any information on this article. All information is provided on an as-is basis. The information, facts or opinions appearing in the article do not reflect the views of NDTV and NDTV does not assume any responsibility or liability for the same.

This entry was posted on January 26, 2015 by Siddharth Varadarajan in Indian Foreign Policy, U.S. Policy in South Asia.