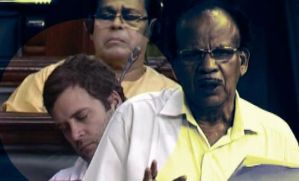 The mettle of a leader is tested not just by his ability to win great victories but also by the manner in which he handles defeat.

After presiding over a campaign which saw his party turn in its worst ever electoral performance, Congress Vice-President and heir apparent Rahul Gandhi cursorily accepted responsibility but then retreated quickly into the comforting shadows of the parliamentary backbench. In some ways, it could not have been otherwise. If it is to have any hope of staging a political recovery, the Congress needs to present a credible and vigorous challenge to the numerically impregnable Bharatiya Janata Party-led government in the Lok Sabha and needs a leader who has complete mastery over both policies and procedures. By opting out of the frontlines, Rahul Gandhi was telling the world that he is clearly not that person.

The only problem is that what the world knows, the party and its ‘high command’ are unwilling to accept.

Instead of treating Rahul’s retreat at this crucial time as an opportunity to re-examine its approach to the question of leadership, the Congress named the veteran but ineffectual Malikarjun Kharge as its leader in the Lok Sabha. On the floor of the house, the party has fumbled in its choice of battles, while in the Rajya Sabha it has relied exclusively on numerical strength rather than political acumen to make life difficult for the Narendra Modi government. While its demand for formal recognition as The Opposition has considerable merit, the Congress has allowed the debate over the post of Leader of the Opposition to be reduced to a question of privilege rather than purpose.

What are we then to make of Rahul Gandhi’s assertiveness on Wednesday, when he joined other Congress MPs in the well of the house to protest the government’s refusal to discuss the growing incidence of communal violence in Uttar Pradesh? Speaking to reporters outside Parliament later, Rahul said, “There is a mood in Parliament that only one man’s voice counts for anything in this country.” His angry words may be a clear reference to Narendra Modi’s vice-like grip over the BJP, the government and Parliament, but are they the product of a dilettante’s ire or the opening salvo of a man determined to establish leadership credentials?

Coming days after pointed speculation in the media about how a section of Congressmen are keen for Priyanka Gandhi to enter the party organization, it is tempting to see Rahul’s combativeness as an expression of sibling rivalry. Indeed, senior BJP leader Arun Jaitley has accused the Congress vice-president of getting agitated over a “non-issue” because of an impending “palace coup.”

Leaving aside the lamentable inability of the Congress to think beyond the Gandhis, these theories are overblown for two reasons.

First, Rahul Gandhi’s failure as a leader is as much the product of his own limitations as it is of the obstacles that Sonia Gandhi’s stewardship of the Congress has placed in his way. Between the radicalism of Rahul and the cautiousness of his mother, the party organization in state after state has become completely moribund. Rahul Gandhi became the visible face of the Congress in the elections but “only one (wo)man’s voice counts for anything” in the party. That voice will not allow daughter to be played against son.

Second, it is far from clear that Rahul Gandhi’s outburst represents a genuine inflection point in the Congress vice-president’s approach to politics and power.

The argument he had put out to justify his aversion to a leadership role in Parliament is that he would like to concentrate on rebuilding the party organization. So far, at least, we have seen little public evidence of the latter; indeed, with key states like Maharashtra, Haryana, Jharkhand and Jammu and Kashmir going to the polls later this year, the Congress desperately needs to turn in a credible performance. In both Maharashtra and Haryana, the state Congress leadership is banking on crude vote bank politics, using reservations in the former and the creation of a separate Shiromani Gurudwara Prabandhak Committee in the latter to improve its chances.

Throughout the country, dissidence within the party is rife. Someone like Indira Gandhi would have leveraged her performance as an opposition leader within Parliament to create political space for the Congress nationally, while bringing the party in line in the states. However, no one expects the current vice-president to play such a role. One sound-bite does not a leader make. To paraphrase (and invert) Mark Twain’s famous remark about his own death, rumours of Rahul Gandhi’s resurrection are greatly exaggerated.

This entry was posted on August 6, 2014 by Siddharth Varadarajan in Indian Politics.