The good, bad and bold of the Congress manifesto 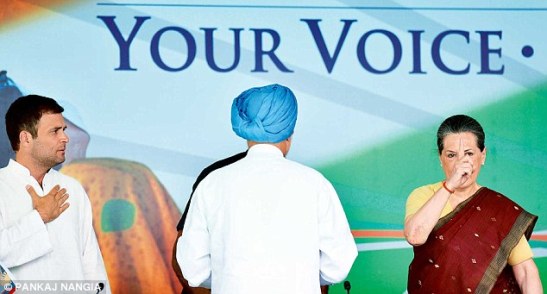 Tokenism abounds in the manifesto – pledges for women, minorities and the Scheduled Castes and Scheduled Tribes with many old promises dusted off and repackaged for the second, third and even fourth time in as many elections.

If only promises won elections, the Congress would romp back to power with an even larger number of seats than it won in 2009. In terms of sheer heft and attention to detail, the party’s election manifesto for 2014 is an impressive document that is more than twice the length of what was pledged in 2009. There are some good, if overdue, ideas such as the big emphasis on health as well as the plan to push for the construction of toilets in every household. There are also one or two bold ones – the promise of decriminalizing homosexuality, for example – and some nutty ones, like the appointment of a special envoy to tackle the problem of black money. (Read the complete manifesto here) But the bulk of the manifesto weaves together the same sort of promises that the Congress and many other parties have been making for years. And there is no reason for the public at large to be bowled over by them. Policies can and do matter. But political contests also revolve around the question of faith, trust and credibility. And this is the key metric on which voters are likely to take a call when they begin their tryst with democracy on April 7.

Rahul Gandhi assured us that 90 per cent of what was promised in 2009 has already been implemented. If that were really the case, the Congress would not be where it is today. Buffeted by the economic slowdown, corruption charges and panic-inducing opinion surveys, the party literally has its back to the wall.

So far, at least, this election has started looking like a fight between the Bharatiya Janata Party under Narendra Modi and Arvind Kejriwal’s Aam Aadmi Party, with the Congress barely registering a presence in the collective mind space. Will the manifesto galvanise both party leaders and rank-and-filers to plunge into battle? More than the cleverness or practicality of specific pledges, this is the question that needs to be asked.

In terms of the broad framing, Rahul Gandhi – whose stamp of authority over both the manifesto and the party was made apparent by the prominent role he played at the post-launch press conference — emphasized that the Congress intends to carry three broad sections of the population. These are the poor, the middle class and industry.

The poor have always been the primary reference point for pledge-making in the past and this time too there is plenty in the manifesto for them. Take health, for example. Precise estimates vary depending on which set of figures one believes, but public spending on health in India today stands at only around 1 per cent of the GDP.

The Congress now says it will increase this figure to 3 per cent and will make the Right to Health justiciable. These are laudable goals. But they are hard to reconcile with other elements of the manifesto such as strict adherence to fiscal deficit limits, especially in the absence of some major new source of revenue.

There are other contradictions too. The manifesto promises workers the “strictest implementation of [the] Contract Labour (Regulation and Abolition) Act of 1970, to end [their] exploitation … and to improve their welfare and working conditions.” But it also assures industry that the Congress recognizes “the need for creating flexibilities in the labour market, especially in the export-oriented industry, given the cyclical nature of demand.” Since the contract system is industry’s preferred method of creating flexibility in the labour market, it is hard to see how these two promises can be reconciled very easily.

Elsewhere, the manifesto tries to promise industry a smoother process for securing environmental clearances for their projects by establishing a new National Environmental Assessment and Monitoring Agency (NEAMA). Why a new bureaucracy is needed when the Ministry of Environment and Forests already exists is not clear. And if the MoEF-run system is riddled with inefficiencies and corruption, what is the guarantee that similar problems won’t arise in the proposed NEAMA?

Another dodgy idea is the plan to appoint a special envoy to help bring black money back to India. The growth of black money is a serious problem for India but any plan to tackle and end the menace must surely focus on reforming the property market, which is the primary investment destination for unaccounted cash. Ashok Khemka, the Haryana bureaucrat who launched a probe into Robert Vadra’s questionable property deals in the state, has suggested the mandatory use of the Aadhar number for all land transactions.

But Congress leaders in Haryana and at the Centre have not thought much of the proposal. Yes, efforts are needed to push Switzerland and other banking havens to be more forthcoming with information about unaccounted money deposited within their jurisdictions. But unless the domestic roots are not attacked, the problem of black money will not go away.

Tokenism abounds in the manifesto – pledges for women, minorities and the Scheduled Castes and Scheduled Tribes with many old promises dusted off and repackaged for the second, third and even fourth time in as many elections. Consider the Women’s Reservation Bill.

“The Indian National Congress will ensure that the Bill for reserving 33% of the seats in the Lok Sabha and the State legislatures is passed in the 15th Lok Sabha and that the elections to the 16th Lok Sabha are held on the basis of one-third reservation for women”, the 2009 manifesto said. If the Congress had actually delivered on that promise, the party would have been on a surer footing in the coming elections. Similarly, no serious efforts were made to ensure the passage of the Communal Violence Bill mentioned first in 2004, or even to deliver on the promise of proper compensation and rehabilitation for riot victims mentioned in 2009. Nevertheless, the 2014 document once again makes tall promises in this regard.

Postscript: The phrase ‘aam aadmi’ figured six times in the Congress’s 2009 manifesto. Those were happier times, when the phrase was something the party could feel proprietorial about. This time around, the two words are missing completely, their absence a reflection of how much the political terrain in India has changed in the past two years.

(Siddharth Varadarajan is a Senior Fellow at the Centre for Public Affairs and Critical Theory, New Delhi)

This entry was posted on March 26, 2014 by Siddharth Varadarajan in Indian Politics.