More than a few glimmers of hope 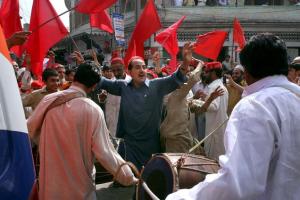 By granting broad rights to the provinces and parliament, the 18th amendment to the constitution has opened a door for the long-term reconfiguration of politics and state power in Pakistan. And that’s good news for India…

More than a few glimmers of hope

Working quietly and even stealthily, Pakistani politicians have pulled a rabbit of hope out of their hat in the shape of the 18th amendment to the constitution. Remember hope? Hare today, gone tomorrow, he was last spotted scurrying down a deep hole, even as men in khaki strutted around in Islamabad and Washington holding strategic dialogues, and terrorists with suicide vests and ridiculous edicts prowled the streets asserting their sole right to determine the future of Pakistan.

The men in khaki are still there, as are the terrorists, and they will probably be around for a while still. But the latest constitutional amendment, coupled with the first proper award of the National Finance Commission (NFC) in 13 years, has opened a door to the long-term reconfiguration of state power, primarily by increasing the economic and, eventually, political weight of Balochistan, Sindh and Khyber-Pakhtoonkhwa (the new name for the North West Frontier Province) vis-à-vis the federal government. The NFC has given them a greater share of tax revenues by moving away from population being the sole criterion for allocation. And the 18th amendment, which also makes the provinces co-owners of the oil and gas reserves under their soil, says the provincial share in the NFC cannot be reduced. This means the share can either stay the same or go up, affecting direct claimants to the federal purse such as the military establishment. By itself, this may seem like a small step. But it is bound to become an important factor in the slow transformation of Pakistan into a “normal” democracy – a democracy where the military’s guidance is neither expected nor imposed. Earlier, the provincial masses were the mainstay of opposition to military rule; the new arrangements give provincial elites a stake in genuine federalism and democracy.

As an all-party committee of Pakistani legislators worked under the radar on these reforms for eight months, India, like the rest of the world, allowed itself to become convinced its neighbour was going down the tubes. The last 12 months has seen the power and influence of the military establishment grow enormously. That’s bad news, given that most of the problems Pakistan is dealing with today – terrorism, extremism, regional unrest, economic mismanagement, the shortage of electricity and water — are a legacy of decades upon decades of military rule.

The blame for this reassertion of military power and prestige lies, firstly, with the United States, which continues to treat GHQ as its most valuable strategic asset within Pakistan. But the country’s major political players – primarily the Pakistan People’s Party of President Asif Ali Zardari and the Pakistan Muslim League of Mian Nawaz Sharif — must also share a part of the blame. Their jousting and squabbling has only made it easier for the generals to present themselves as anchors of stability. The celebrated ‘independent judiciary’ of Pakistan has also queered the pitch. Chief Justice Iftikhar Chaudhary is fighting legal battles that belong to an earlier era, battles whose resolution today can only weaken the power of political parties at a time when the country needs mass politics more than ever before.

There is, no doubt, enormous merit in exposing the fraudulent manner in which earlier governments used their authority to drop high-profile cases of corruption against Mr. Zardari and his late wife, Benazir Bhutto. But can the polity of Pakistan afford to be selective about its past sins? If there is to be legal accounting for the Swiss cases and others against the Bhuttos, what about an honest and wholesale judicial repudiation of the “doctrine of necessity”, first introduced in Pakistan by Chief Justice Muhammad Munir in 1954 and used by the Supreme Court meekly to rubber-stamp one coup after the next? Some may argue that Justice Chaudhary’s final stand against Pervez Musharraf symbolically cleansed the Pakistani judiciary of the stain of complicity. By the same token, the fact that Mr. Zardari has become the first President in a land of usurpers to return powers and prerogatives to the Prime Minister and Parliament must surely count for something.

The 18th amendment, passed by a two-thirds majority in the National Assembly on Thursday, will go some way towards exorcising the ghosts of the past by calling the suspension of the Constitution an act of high treason. But whether textual provisions serve as a deterrent to the military and its apologists amongst the Pakistani elite would depend, in the first instance, on the willingness of political leaders and parties to stand up for what they have now inscribed.

From India’s perspective, the new changes are good news. They provide strong confirmation of a key assumption Indian policymakers made when assessing how to react to the terrorist attacks on Mumbai in November 2008. Resisting the temptation to go hawkish, Prime Minister Manmohan Singh understood at the time that political power in Pakistan was fragmented and in a state of flux. And that India should seek to strengthen the hands of those who are opposed to terrorism and who favour better bilateral relations. Even if the 18th amendment by itself does not immediately strengthen the hands of liberal, rational elements in Pakistan, it certainly creates the conditions for that to happen. On its part, India needs to do all it can to encourage the process.

Unfortunately, Indian policy towards Pakistan over the past few months has been slightly schizophrenic. Within the overall policy of remaining engaged with, and encouraging, democratic forces, there have been significant deviations. Dr. Singh may have been factually accurate when he told an interviewer last November that he didn’t know who to deal with in Pakistan now that General Musharraf was no longer in power. But his frank expression of uncertainty in the Zardari-Gilani administration only ended up further undermining the credibility of the elected government.

A much worse kind of insensitivity was on display last month when ill-informed speculation that the United States was on the verge of entering into a civil nuclear agreement with Pakistan sent the Indian media into a tizzy. This prompted the Ministry of External Affairs to come out against the possibility of such a deal. In 2008, Pranab Mukherjee, who was external affairs minister at the time, had said, quite correctly, that India was in favour of Pakistan being able to access all forms of energy for its development. “In respect of civil nuclear cooperation between Pakistan and the U.S., we would like to encourage civil nuclear cooperation — its full use of nuclear energy — as we believe every country has its right to use nuclear energy for peaceful purposes,” he answered when a direct question was put to him by reporters in Washington. As a politician, Mr. Mukherjee knew that the prospect for such an agreement was very remote and that there was no harm in India being on the side of the angels. This time too, South Block ought to have known there was no nuclear deal in the works for Islamabad. Under the circumstances, publicly opposing such a hypothetical deal was not only unnecessary but unhelpful too. It needlessly gave extremists a stick to use in their propaganda that India was opposed to Pakistan’s progress. It also helped to alienate the politicians who form part of the elected government in Islamabad, since Prime Minister Gilani had publicly announced his desire to pursue nuclear cooperation with the U.S.

As India formulates its next moves with Pakistan, it needs to focus on what is important and vital and ignore the sideshows and booby-traps. Above all, it needs to factor in the new arrangements that are taking shape across the border. Pakistan is not a failed state and will not easily become one because there are enough Pakistanis who are determined to fight for the right to live in a democracy, a democracy that is genuinely federal, prosperous and free from the curse of religious extremism and terror. The 18th amendment is a reflection of that determination, even if many more battles remain to be fought and won.

The last meeting between the two foreign secretaries produced no substantial move forward because both sides are reluctant to deviate from their current positions. India says there can be no substantial dialogue until the infrastructure of terrorism which still exists in Pakistan is destroyed. Pakistan says no to any form of talks short of the resumption of the composite dialogue. It is possible that after a few weeks of churning in Islamabad — a major clash between the judiciary and the government over Mr. Zardari’s cases is looming — the Pakistani side may agree to another round of talks about talks. India must respond positively, even as it takes proactive steps on trade and other fronts to build constituencies for peace with its western neighbour.

This entry was posted on April 10, 2010 by Siddharth Varadarajan in Indian Foreign Policy, Pakistan.