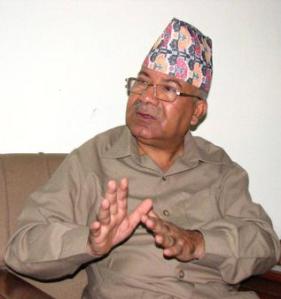 “Integration of combatants will be based on letter and spirit of past agreements” … In an exclusive interview to The Hindu on the eve of his first official visit to India as Prime Minister of the Federal Democratic Republic of Nepal, Madhav Kumar Nepal spoke at length about the problems the peace process is facing. The interview took place at his official residence in Kathmandu on August 16. Excerpts…

‘Let the Maoists sit in opposition’

In an exclusive interview to The Hindu on the eve of his first official visit to India as Prime Minister of the Federal Democratic Republic of Nepal, Madhav Kumar Nepal spoke at length about the problems the peace process is facing. The interview took place at his official residence in Kathmandu on August 16. Excerpts:

You are coming to India at a time when there is great uncertainty surrounding both the fate of the peace process in Nepal and the task of writing a new constitution. Yet you have been saying you want to discuss major new projects like Pancheshwor with New Delhi. What exactly is on the agenda?

So you are not looking for progress on any one issue? You agree that talking about big projects seems unrealistic.

Yes, the current stage is not so conducive because there are lot of problems inside the country. The Maoists, now they are out of government, are creating many hurdles here. But we are hopeful things will come to a proper position. In the meantime, we have to do something that will be beneficial for Nepal. That’s why we have a plan to develop our hydropower potential to the maximum extent and for that we need foreign investment, cooperation with India on these matters. The same is true about tourism. India with a huge population, Hindu population, has a religious touristic destination in Nepal. Apart from that, there is a huge trade deficit between Nepal and India. We have to find ways to reduce that deficit. So there are many issues that need to be pushed ahead properly.

It is the view of many that the peace process cannot proceed unless serious efforts are made to bring the Maoists back in, to form a national government. Your party leader, Jhalanath Khanal has been saying this. But others in the UML and Nepali Congress speak differently. Do you feel it is important to reach out to the Maoists and find a way of bringing them in?

We need to address the serious concerns and sensitivities of the Maoists but we cannot fulfil all their demands and aspirations. They still have an insurgent mindset, extreme left ideological remnants in their minds. Until and unless they get rid of all these ideological dogmas and all kinds of nondemocratic and undemocratic thinking, it will be very difficult to address their concerns.

But what they are asking for is only a debate in the Constituent Assembly. What is undemocratic about that?

They are demanding that the President’s step [rejecting the dismissal of former army chief Rookmangad Katawal] should be discussed in parliament. We have a provision in our constitution that there cannot be any debate on the president’s decisions. We have to abide by that. If they believe the president acted against the constitution, there is a provision to move an impeachment motion in parliament. That is the proper way. But they don’t dare to do that. Rather they want to discuss some other resolutions there, hoping this will divide the house and they will benefit, or embarrass the president and will put moral pressure on him. As Prime Minister, how can I allow others to embarrass the president there? He cannot go there to defend himself. So how can it be allowed?

But even in an impeachment motion, he cannot go there and defend himself. It seems as if you are raising a procedural objection when your objection is more political. The Maoists essentially want a discussion on civilian supremacy. This can easily be separated from Katawal and the President’s decision and an agreement reached on the core principle. If there is a will to solve this and bring the Maoists back in, surely it is not difficult to come up with a compromise solution in terms of procedure.

This is linked to the intention of the Maoists. We don’t see any good intention of the Maoists on this. We have been insisting that whatever has happened has already been passed, so let’s look for future. We can have a discussion among political parties and a task force can be created to look at what is the system in other countries, how relations between the president and prime minister are and how civilian supremacy is legally and constitutionally managed, and then come out with some recommendations.

Also, whatever is needed to assure the Maoists can be done. They were asking to see General Katawal retire smoothly. That was done. There were these rumours about him extending his term, keeping him as adviser to president, etc. But he is not there any more. So we have taken positively their concerns and addressed them.

The danger is the longer the stalemate persists, the harder it will be for the CA to finish writing the constitution.

Yes, I do feel that. But once the door is opened, the Maoists may have another demand raised! So we are not fully convinced that they have only one demand before us. We had an agreement that they would cooperate in the budget session but they have gone back on it. This shows the extremist line is dominating in the Maoist party. And we should not just bow down before that extreme left opinion.

Recently NC leader Girija Prasad Koirala said the Maoists could meet the same fate as the LTTE. Some people here are talking about a ‘Sri Lanka type solution’ of all-out war. Don’t you think such comments further vitiate the atmosphere and should be avoided?

I don’t have any comment on this. Whether he has and why he has mentioned this, [Mr. Koirala] may have his own opinion I can’t defend, nor contradict it.

Where do you stand on the issue of integration? Do you support the integration of a portion of combatants of the Maoist Peoples Liberation Army in the Nepal Army as was agreed? And by when must this be done?

First, we must resolve the peace process and among all the remaining issues, the situation of combatants in the cantonments needs to be completed, resolved. The cantonments must be closed before we finalise the constitution. That is very clear. Without resolving completely the issue of combatants in the cantonments, we cannot decide finally the constitution. Second, how to resolve the issue of combatants? This must be done as per the agreement and understanding among the parties. Whatever agreement is there between Maoists and government, and the other political parties, that must be respected by all. So the government will respect the letter and spirit of whatever is written there. If there is clear mentioning of integration in the army, then that must be done. If it is written combatants should be integrated in the security forces, then this requires more elaboration and clarification.

What do you think the agreements say?

I have not gone deeply into it.

But you helped draft those agreements. You know what is written!

When the issue will come up… but I have made it clear, whatever is written, we will implement.

The problem is there are so many interpretations and this is fuelling mistrust. The Indian ambassador [Rakesh Sood] has given his own interpretation that there should only be “integration into society”, not army. Mr. Koirala and K.P. Oli say no integration. So will your line prevail or that of Mr. Koirala and Mr. Sood and Mr. Oli?

All these discussions should take place in the special committee. That is the proper place. But the Maoists are creating hurdles there.

But you are insisting on being the chair.

Because I am the PM. Also, remember, they are the party whose combatants need to be properly managed. It doesn’t seem proper if they should take the chair of the committee. It will smooth the way to do all things properly if I am there, if a third person takes charge of running the committee. This will help the Maoists.

I come back to the issue of trust deficit. Recently, you said 5000 PLA soldiers could be integrated in the Army. Then you backtracked. People say this was after some generals came to see you.

No army generals up to now came to me and asked anything. In those comments, I had just mentioned what [Maoist leader] Prachanda had told to me about how many PLA combatants should be integrated in the Army.

How worried are you about the law and order situation in the Tarai? There are said to be more than 100 armed groups operating.

I am worried. Our government has made a plan to deal with it properly. We have to distinguish between criminal groups and those that have political ideology behind them. The latter need to be brought in ambit of peace process. As for those groups which are criminal, they must be dealt with sternly. Abductions, killings, extortion, don tendencies should not be tolerated. And we need the cooperation of India.

One of the complaints Indian officials had about Prachanda when he was prime minister was that they felt he was trying to play the ‘China card’. What is your assessment of his foreign policy?

I think we should not play any cards against others.

Is that what you think Prachanda was doing?

I can’t say about him, it is not good that I should just raise any charges against him. But our policy should be transparent and clear. We don’t like to see any activities inside Nepal against our neighbours. And we don’t have to play against each other. We have to take our neighbours into confidence. We are real and genuine friends of India and Nepal cannot have a peaceful environment until it takes the confidence of all neighbours. So we don’t have to play Chinese card against India and Indian cards against China. Why do that? This would be a very sectarian and short-term strategy. It is not good.

So equidistance would also be your approach?

I don’t think mentioning the word equidistance will be good. We have to take maximum advantage of our geographic location. Nepal borders India from three sides. What we can achieve from India cannot be achieved to that extent from China. But we have to keep in mind Nepal is an independent, sovereign country. The sentiment and patriotism of the Nepali people should be taken into account. Otherwise there are people who can create controversies and rumours against friendly countries.

Does India take Nepal for granted? Your visit will be the umpteenth by a Nepali prime minister to Delhi. But the last time an Indian Prime Minister paid an official bilateral visit to Kathmandu was I.K. Gujral in 1997.

The political instability here may be one of the reasons. And we may not have tried hard enough to invite friendly country prime ministers to come. So we have to think about that. We have to see the visits should be reciprocal.

If there is a possibility of forming a national government to complete the peace process with Maoist participation or even leadership, would you be prepared to give up power?

This entry was posted on August 18, 2009 by Siddharth Varadarajan in Interviews, Nepal.