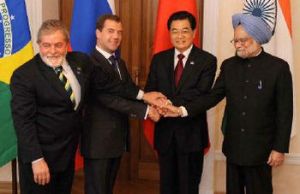 Yekaterinburg: Unveiling a collective agenda ranging from food security and financial reform to the creation of a “more diversified international monetary system” and a “more democratic and just multipolar world order,” Brazil, Russia, India and China launched a new strategic vector with the potential decisively to influence global affairs in the years and decades ahead.

For all its global significance, the first-ever summit of the BRIC countries was a short affair, conducted behind closed doors. The world’s media was given the briefest of glimpses when President Dmitri Medvedev of Russia took the stage with Prime Minister Manmohan Singh, Chinese president Hu Jintao and Brazil’s president, Luis Inacio Lula da Silva to provide details of the interaction that he said was a “historic event.”

The four leaders met first in a restricted and then expanded format with aides on Tuesday evening, formally approving a joint statement that officials said was only finalised at 4 a.m. that morning.

The 16-point statement said the BRIC countries were committed to advance the reform of international financial institutions so as to reflect changes in the world economy. In a more or less direct attack on the Western domination of Bretton Woods institutions like the IMF and the World Bank, the statement said emerging and developing economies must have greater voice and representation and the “heads and senior leadership” of these bodies “should be appointed through an open, transparent and merit-based selection process.”

The statement also contained a veiled attack on the dollar, whose role as the primary international reserve currency Russia, China and, to a lesser extent, Brazil have questioned. “We also believe there is a strong need for a stable, predictable and more diversified international monetary system,” the four leaders noted.

Among the other goals flagged: opposition to protectionism, the need for a “comprehensive and balanced” outcome to the WTO’s Doha Development Round, cooperation in the energy field “including amongst producers and consumers of energy and transit states,” and food security, for which a separate declaration was issued.

On India’s initiative, the statement strongly condemned terrorism in all its forms and manifestations and reiterated “that there can be no justification for any act of terrorism anywhere or for whatever reasons.” Calling for “comprehensive reform” of the United Nations, the BRIC quartet reiterated “the importance we attach to the status of India and Brazil in international affairs, and understand and support their aspirations to play a greater role in the UN.”

In his speech at the summit, Dr. Singh hailed the cooperation already achieved by BRIC at the G-20 deliberations on the international financial crisis. The important issue today, he said was to implement the decisions that had been taken. He also said cooperation in the

G-20 process must be backed by cooperation in the real economy. “The volume of trade among BRIC countries has grown rapidly in recent years, Intra-BRIC investments have also grown.” In line with the joint statement, he endorsed the creation of a BRIC Joint Business Forum which could cooperate in areas as diverse as agriculture, aviation, energy, pharmaceuticals and services.

The BRIC nations, said, Mr. Medvedev, want to have a fair world order and ensure the safety and security of our countries and people. “All the decisions important for the international community — economic, security and political — should be taken on fairer basis,” he said.

“And this fairness is the key word for our interaction. BRIC should create conditions for a fairer world order.”

Officials said Russia favoured an annual summit format, something the Chinese side opposed. Brazil was keen to host the next summit in 2010, during the tenure of President Lula. India then came up with a flexible solution: the summits will be “periodic,” allowing for annual or less frequent meetings. Mr. Medvedev also stressed the need for interaction at other levels such as foreign, agriculture and trade Ministers.

The BRIC joint statement on global food security said attempts to explain the food price hikes by an increase in consumption in developing countries obscured the true causes which had a “complex and multifaceted nature.” The statement also called for the Doha round to be accelerated “in order to find compromise solutions for radical reductions of multibillion dollar subsidies in the agricultural sector, which distort terms or trade and prevent developing countries from increasing their agricultural production.”

This entry was posted on June 17, 2009 by Siddharth Varadarajan in Indian Foreign Policy, Political Economy.