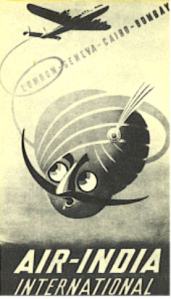 Reporters and editors make tough decisions about what’s news all the time but this one should have been a no-brainer. A minister uses his clout to get his son upgraded on Air India from Economy to First Class and his maid from Economy to Business. The son’s upgrade is the bigger news point surely? Think again.

The Times of India in Delhi carried a story on June 12, ‘Despite ban, AI lets neta’s help get an upgrade’. The online edition headline is ‘AI flies mantri’s domestic help business class’.

The story tells us how a minister misused his clout to get Air India to violate its no-free-upgrade rule:

“Air India recently banned passenger upgrade [sic] to end that free jump from economy to business class for employees, directors, frequent flyers and the influential. On Wednesday, its chairman and managing director’s office – which issued the ban – had to upgrade a 34-year-old woman who could not read or write English from economy to business class on a Mumbai-London flight.

So why was she upgraded when even directors of the airline fly economy these days? Well, she happened to be a minister’s servant and the orders to upgrade her came from the ministry of civil aviation, officials said on Thursday.”

I read this and thought, fair enough, even though I really didn’t see what her being unable to read or write English had to do with story. So imagine my shock when I get to the end of the story and find the minister also upgraded his son…

For the Times of India tells us, at the very end, that the minister’s son, who was on the same flight, was bumped up from Economy to First Class, a complete and utter violation of airline policy:

“It’s not only economy-to-business class upgrades that are being done. Flight 131 had a minister’s son who was moved from economy to first class, the absolute no-no of upgradation. ‘‘Jumping two classes is not allowed and AI has a policy against it. Many ground staff have been chargesheeted for the double upgrade in the past. But this person was a minister’s son and the order came from the ministry and so it had to be obeyed,’’ an official said.”

Not only was the main news point about such a story relegated to the last para, it was inexplicably deleted from the online version. I had to find the full original story from the epaper archive at the TOI site. I guess the reporter and the newspaper’s editors thought their readers would get more worked about the maid “who doesn’t read or write English” flying Business Class than about a spoilt and undeserving but English-speaking baba making a nuisance of himself in First Class! Another instance of the paper’s class prejudice: the unfortunate domestic help is named but not the minister or his son.

Postscript: When I read the story, I also had a sense of deja vu.

Many years before, when I used to work for the TOI, I overheard a conversation involving somebody whom I will only describe as being part of the upper management of the newspaper. Very upper. The person was upset that on a recent flight to Europe, he had booked himself and his family in Business class and found the person seated next to him was… the maid of Kumaramangalam Birla, who was, of course, flying with his family in First Class!

7 comments on “Class prejudice in reporting”

This entry was posted on June 13, 2009 by Siddharth Varadarajan in Media.