Watch me on the new government’s challenges @ CNN-IBN 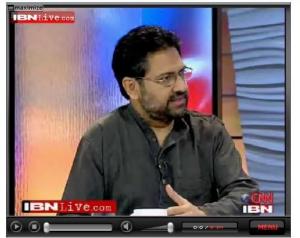 I took part in an interesting hour-long discussion on CNN-IBN last night with Kapil Sibal and Lord Meghnad Desai on the new government’s challenges. We spoke about the economy, reform, Pakistan, Obama and the problems of intenal security. The anchor was Karan Thapar and the video can be watched online here.

This entry was posted on May 18, 2009 by Siddharth Varadarajan in Indian Foreign Policy, Indian Politics, Interviews, Political Economy.