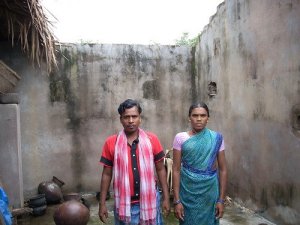 Alongside the arming of private militias, the jailing of a human rights defender for two years on trumped up charges is proof that there is no rule of law in Chhattisgarh…

Alongside the arming of private militias, the jailing of a human rights defender for two years on trumped up charges is proof that there is no rule of law in Chhattisgarh.

Every criminal case is unique but there is something truly peculiar about the fate of Dr. Binayak Sen. While politicians, film stars, gangsters and businessmen accused or convicted of heinous offences like manslaughter, rioting and possession of firearms seem to have no trouble getting bail, the gentle doctor is considered such a dangerous criminal that he has been held in jail for two years on a far less serious charge.

Arraigned under Chhattisgarh’s draconian Public Security Act, Dr. Sen, who is also the national vice-president of the Peoples Union for Civil Liberties, has repeatedly been denied bail by the trial court and High Court. Regrettably, the Supreme Court too rejected his special leave petition for bail in December 2007. Binayak’s trial is now underway.

As per the original chargesheet, 83 witnesses were meant to depose against him. Of these, six were declared hostile by the state and 16 were dropped while the remaining 61 testified in court. However, none has corroborated the prosecution case that Dr. Sen delivered a letter from Maoist leader Narayan Sanyal, whom he used to visit in Raipur jail in his capacity as doctor and civil libertarian, to some wider Naxalite network.

Be that as it may, are there valid grounds for refusing Binayak bail? No. For one, he is not a flight risk, a fact he demonstrated at the outset by turning himself in when he heard during a visit to Kolkata that the Chhattisgarh authorities were looking for him. The second reason bail is sometimes denied is the fear that an under-trial might use his liberty to influence witnesses. But there are no more witnesses left for Dr. Sen to suborn. Of course, sensing the collapse of its flimsy case, the police say they will produce more witnesses.

But it is evident that this is just a tactic to punish the victim through process since the evidence on the basis of which the original arrest was made was clearly insufficient to sustain a conviction.

If there are no valid reasons to deny bail, the fact that Dr. Sen in a heart patient who is being deliberately denied proper medical care at a facility in which he has confidence means any delay in his release may prove fatal to his health. In February, Dr. Sen noticed the onset of symptoms of heart disease but the authorities ignored his pleas for help. His wife, Ilina Sen, then asked the court to send him for treatment to a hospital of his choice, as envisaged by the Prisoners Act. Dr. Sen conveyed that he would like to be treated at CMC Vellore, where he had studied and in whose doctors he had full faith. On February 20, the trial judge ordered the prison authorities to get the opinion of a medical board on Binayak’s heart condition.

Despite being examined at Raipur district hospital, no treatment was offered and Binayak had to move the court again. The judge subsequently ordered that he be examined in Raipur by any doctor he wanted, who, in turn, would decide on onward referral to CMC Vellore.

On March 25, Binayak was examined by a doctor of his choice in the presence of Ilina Sen. The doctor diagnosed him with Coronary Artery Disease and referred him to Vellore for an angiography to be followed by angioplasty or bypass surgery. A copy of the prescription was handed over to Ms. Sen but no action has been taken because the Jail Superintendent procured another note from the doctor in which he said angiography facilities were available in Raipur and that Vellore was mentioned only because Binayak wanted to go there. On the basis of this note, the authorities are insisting Binayak be treated in Raipur, something he is rightfully refusing since he has begun to fear the worst about the police’s intentions.

The Supreme Court is already seized with another grave matter from Chhattisgarh – the extra-legal depredations of the state-sponsored Salwa Judum in a Public Interest Litigation filed by Nandini Sundar and others. In their obiter, the learned judges have said it is not permissible for the state to arm private citizens to commit crimes like murder and arson.

More than one lakh adivasis have been displaced by the Salwa Judum.

Far from heeding the apex court’s warning, the BJP, in its election manifesto, has promised “the ‘Chhattisgarh Model’ will be used for counter-Maoist operations” elsewhere in the country.

It should come as no surprise that violence and intolerance go hand in hand. Salwa Judum is the most dangerous aspect of the ‘Chhatisgarh model’ but the persecution of Dr. Binayak Sen, the intimidation of the local media and the refusal to tolerate the opposition of adivasis to the land grabbing agenda of corporate giants are also part of this ‘model’.

When the executive is bent on subverting rights guaranteed by the Constitution, the judiciary has an obligation to act. Putting a stop to Salwa Judum and releasing Binayak are two remedies that are urgently required.

This entry was posted on April 27, 2009 by Siddharth Varadarajan in Human Rights, Indian Politics.