Immunity for mobs in the ‘war on terror’ 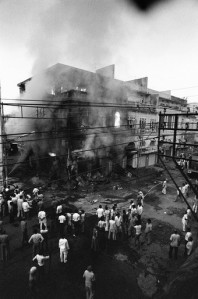 Within weeks of the Mumbai terrorist attacks, a new anti-terror law was hurriedly passed. But seven years after Gujarat, the promised law to deal with communal violence is nowhere in sight…

Immunity for mobs in the ‘war on terror’

Despite the arrest of Gujarat minister and BJP leader Mayaben Kodnani for her role in the 2002 mass killing of Muslims in Ahmedabad, the Congress party’s decision to give tickets to Sajjan Kumar and Jagdish Tytler is a reminder of the impunity that is built into the very edifice of Indian politics and law.

Even before the Central Bureau of Investigation gave its predictable “clean chit” to Mr. Tytler and declared there was no evidence to prove his involvement in the November 1984 massacre of Sikhs, the Congress party high command had no qualms about fielding him and Mr. Kumar for the upcoming Lok Sabha elections from Delhi. The relentless passage of time and the willful sabotage of criminal cases at the investigation stage have done for Mr. Tytler what all the perfumes of Arabia could not do for the Macbeths. But for a politician who wants to stand for public office, this is hardly much of an exoneration. It matters not a farthing that 25 years later, the CBI sends detectives across half the world to interview and then discredit a sole surviving witness. What matters is that CBI and Delhi Police investigators were nowhere in sight in the days and weeks following the killing of 3,000 Sikhs in the national capital when the relief camps were full of survivors willing to testify to the involvement of top party bosses. That was the original act of erasure which even the most persistent of criminal investigations will find difficult to undo.

At the same time, it is a measure of how low we have sunk as a nation that we are supposed to feel relieved that a man who might be minister again was apparently not involved in genocide. I do not care how many innocent people might have died as a result of the actions Mr. Tytler is alleged to have committed. The answer to that question involves a burden of proof which is beyond the ken of an average person. The question I want an answer to is this: How many people did you save, Mr. Tytler? You were an important leader of the ruling party at the time and your clout is such that the Congress even today feels obligated to give you a ticket. “If you save one life, it is as if you have saved the world,” the Talmud says. Bearing silent witness to injustice, as Bhishma and Dronacharya did, makes one morally culpable. Modern jurisprudence tells us that allowing the commission of a heinous crime that one was in a position to prevent makes one as guilty of the offence as the actual perpetrator. Throwing a stone at a gurudwara or emptying a jerry can of petrol on a helpless man or inciting others to do these terrible things are not the only ways of committing a crime. Walking away when all of this is happening or about to happen makes a leader or police officer just as guilty. And no matter what the CBI says, Mr. Tytler, the whole world knows that that is what you and your senior colleagues did during those fateful days in November 1984.

In any civilized society, that act of walking away would itself render a politician unfit for elected office. In India, however, every party, barring the Left, sees some political benefit from inciting communal hatred or violence and then deploying mob ringleaders as candidates. If the Congress has its favourites, the Bharatiya Janata Party has no problem fielding Varun Gandhi or Manoj Kumar Pradhan, accused of being one of the ringleaders of the anti-Christian violence in Orissa last year.

The reason our political parties are able to get away with this is because communal violence, or mob terrorism, is not treated by our mass media or civil society as a crime as shocking and monstrous as terrorism perpetrated through bomb blasts and suicide squads. When it comes to terrorism of the latter variety, public sentiment runs so high that lawyers refuse to defend individuals accused of such offences. Within weeks of the November 26-29 terrorist incidents in Mumbai, a media-orchestrated clamour led to the reintroduction of anti-terror laws in India. But individuals accused of instigating and orchestrating the mass murder of religious minorities through the use of mob terror enjoy effective impunity.

Last year, while appointing a Special Investigation Team (SIT) to probe the hundreds of cases of communal violence that still remain unpunished in Gujarat, the Supreme Court made the following observation: “Communal harmony is the hallmark of democracy… If in the name of religion people are killed, that is absolutely a slur and blot on the society governed by the rule of law… Religious fanatics really do not belong to any religion. They are no better than terrorists who kill innocent people for no rhyme or reason.” These remarks were reiterated by the Gujarat High Court recently in its landmark judgment cancelling the anticipatory bail of Mayaben Kodnani.

But if the judiciary is clear about the equivalence of mob terrorism and bomb terrorism, why is there a double standard in both statute and public discourse? In the 2004 elections, the Congress promised to redress this legal lacuna by enacting a new law to deal with communal violence. The draft Bill the Union Home Ministry came up with was so useless that the very activists who earlier wanted the law and who fought hard but unsuccessfully to improve its provisions ended up lobbying the government to kill it. And now, in its latest manifesto, the Congress has completely resiled from its original promise, offering instead “a law that empowers the National Human Rights Commission to monitor investigation and trial in all cases of communal and caste violence.” Such a proposal would be laughable if the lives of our citizens and minorities were not at stake. The NHRC already enjoys enormous powers which it refuses to exercise. On the rare occasions when it acts, the government finds ways to sidestep its orders or recommendations.

The draft communal violence Bill which the United Progressive Alliance government introduced in the Rajya Sabha a few years ago has many infirmities but its single biggest weakness was the non-incorporation of a norm that is today considered an essential part of international humanitarian law – the doctrine of command responsibility. Police officers and politicians either incite violence or walk away from the scene of a crime because they know they will never be held accountable for criminal dereliction of duty. The statute of the International Criminal Court works around this problem by equating the failure to prevent mass crimes with the actual execution of those crimes. In law, then, officials who don’t lift a finger to save the lives of innocent people cannot claim to be innocent. All that is required is that the prosecution be able to prove that the concerned official had reason to assume a crime which he was in a position to prevent was about to occur. Had such a provision been on the Indian statute books in 2002 or 1984, the senior police officer who walked away from Ehsan Jaffrey’s house in Ahmedabad would be in prison rather than lobbying for a comfortable sinecure. And the Member of Parliament who came and saw a mob in 1984 but refused to conquer it by using every bit of influence at his disposal would not be eligible for elected office.

8 comments on “Immunity for mobs in the ‘war on terror’”

This entry was posted on April 7, 2009 by Siddharth Varadarajan in Communal Violence.