Reprocessing request is the first test of nuclear deal under Obama 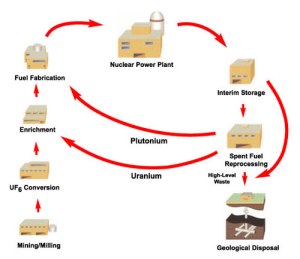 India has put in a formal request for talks and the U.S. has till August 2010 to work out ‘arrangements and procedures’. Given the experience of Tarapur, the Indian side is unlikely to accept any ambiguity over its ability to reprocess American spent fuel in the future and failure to reach agreement will jeopardise the prospect of American reactor sales to India …

Reprocessing request is the first test of nuclear deal under Obama
India, U.S. have till August 2010 to work out ‘arrangements and procedures’

New Delhi: India has formally asked the United States to negotiate the “arrangements and procedures” under which American spent nuclear fuel will be reprocessed in the country, presenting the Obama administration with its first test of how committed it is to the India-U.S. nuclear agreement.

The request was made last month, senior officials told The Hindu.

Under the terms of the ‘123 agreement’ on bilateral nuclear cooperation, Washington has six months to begin consultations and one year after that to reach an understanding with Delhi. “The clock has started ticking,” an official said. “We have till the end of August 2010 to finalise an agreement.”

The 123 agreement gives India prior consent to reprocess but stipulates that this right will come into effect only when India establishes a new national facility dedicated to reprocessing safeguarded nuclear material under IAEA safeguards and reaches an agreement with the U.S. on “arrangements and procedures under which such reprocessing … will take place in this new facility.”

On February 3, Foreign Secretary Shiv Shankar Menon wrote to Under Secretary for Political Affairs William Burns invoking this provision and asking the U.S. side to propose dates and an agenda. A similar letter was also sent from the Department of Atomic Energy to Richard Stratford, head of the State Department’s Office of Nuclear Energy and Washington’s pointman for nuclear negotiations with India.

The request is important for two reasons. First, because it will provide the first indication of how President Barack Obama intends to balance traditional American ‘non-proliferation concerns’ about reprocessing with the broader geopolitical interests underpinning the strategic partnership with India. And second, because the prospects of American companies winning a slice of the multi-billion dollar Indian market for nuclear energy depends crucially on India being satisfied that it will be able to reprocess the spent fuel which accumulates from the running of U.S.-supplied reactors.

Last January, Atomic Energy Commission Chairman Anil Kakodkar explicitly told a delegation of the U.S.-India Business Council — which included many representatives of the American nuclear industry — that there would be no reactor purchases without reprocessing.

Shortly after that meeting, Ted Jones of the USIBC told the Washington Post that Dr. Kakodkar had said commercial ties could commence “only after talks about reprocessing rights are concluded.”

If the State Department’s Bureau of Non-proliferation — likely to be headed by Robert J. Einhorn — plays a role in the process of formulating reprocessing arrangements and procedures, the proposed talks could hit an early roadblock. Mr. Einhorn fiercely opposed the nuclear agreement with India ever since it was first unveiled in 2005.

At the same time, the default position bequeathed by the Bush administration is not without problems for India either. In answers to questions from Congress last year, for example, the State Department and the Bush White House said that reprocessing consent rights for India would not be permanent and could be rescinded.

Given the negative experience of Tarapur, where a vast acreage of spent fuel has accumulated following Washington’s decades-long refusal to endorse reprocessing, the DAE is unwilling to accept any future ambiguity in this regard, especially when the U.S. is looking to sell several thousand megawatts worth of reactor capacity to India.

Since Russian and French reactor exports to India come bundled with reprocessing consent, Washington’s failure to conclude an agreement on reprocessing arrangements and procedures to the DAE’s satisfaction would be tantamount to freezing U.S. vendors out a market that the U.S. itself was instrumental in reopening.

Though the 123 agreement treats the dedicated, safeguarded national facility and the reprocessing arrangements and procedures as two separate preconditions, some U.S. officials have argued in the past that India must first come up with a design of the proposed new facility before detailed consultations on reprocessing can begin.

India, however, sees no link between the two.

This entry was posted on March 6, 2009 by Siddharth Varadarajan in Nuclear Issues.