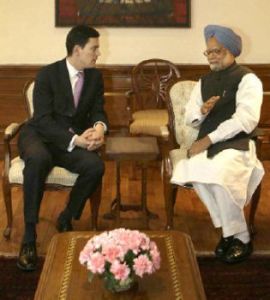 So why did the Ministry of External Affairs issue this rather unusual statement on British Foreign Secretary David Miliband a couple of days ago:

“Mr. Miliband is entitled to his views, which are clearly his own and are evolving. India is a free country and, even if we do not share his views, he is free to express them. However, we do not need unsolicited advice on internal issues in India like J&K.”

New Delhi: It is unusual for the government to publicly criticise the views of a foreign dignitary on an official visit, especially before his trip to India is over. So when Ministry of External Affairs spokesman Vishnu Prakash issued a tartly worded statement on Thursday in response to a question about “certain views expressed by British Foreign Secretary David Miliband,” diplomatic eyebrows immediately went up. The assumption was that India was responding to the views expressed by Mr. Miliband in an op-ed in The Guardian or in his joint press conference with External Affairs Minister Pranab Mukherjee.

Senior officials told The Hindu on Friday the MEA statement was really the product of the irritation India felt with Mr. Miliband for the “aggressive” manner in which he conducted himself in his closed-door meetings with Mr. Mukherjee and Prime Minister Manmohan Singh. In particular, South Block took offence to his strident arguments that the Mumbai terror attacks were really the result of the Kashmir issue remaining unresolved.

“He’s a young man and I guess this is the way he thinks diplomacy is conducted,” said a senior official. “In both his meetings, his posture and style of talking were a little too aggressive. The PM and EAM are much older and this is not what they are used to,” he added, describing the meetings as “quite an episode.”

Mr. Miliband, they said, was also clearly unaware of all that India and Pakistan had done on the Kashmir front from cross-LoC trade to discussing ‘soft borders’ before terror attacks like Mumbai slowed down and brought the process to a halt.

Apart from Mr. Miliband’s demeanour, what irked the Indian side was his insistence on drawing a link between Mumbai and Kashmir. Officials said he berated Dr. Singh and Mr. Mukherjee on this point and said that whatever India may wish to say on the matter in public, in private they must accept that they had to do more to work with Pakistan to find a solution to the Kashmir issue. “Yes, there is a Kashmir issue and we need to resolve it,” the Indian side told the British Minister. “But when a group like the Lashkar, which says it supports ‘global jihad,’ attacks Mumbai and kills Americans and Brits and Jews, what does this have to do with Kashmir?”

Mr. Miliband also annoyed the Indian side by warning the two leaders that Delhi should not even think of taking any kind of military action against Pakistan in the wake of the Mumbai attacks.

All told, say Indian officials, the two meetings with Mr. Miliband were “pretty awful.” India had no objection to the British Foreign Secretary publicly disagreeing with the Prime Minister’s statement that “some official agencies in Pakistan” must be involved in Mumbai. ‘Sovereign governments can and will disagree with each other’s assessments,” an official said. “But he needs to know that we do not take kindly to being hectored.”

What surprised the Government all the more was that British Prime Minister Gordon Brown had been “quite positive” on the issues which concerned India during his visit to New Delhi last month.

This entry was posted on January 17, 2009 by Siddharth Varadarajan in Indian Foreign Policy.