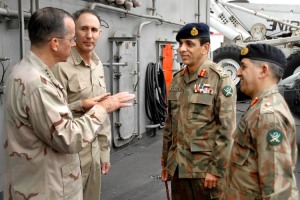 The ISI chief sticks to a sober script throughout but his answer on the Taliban gives the game away. Old habits die hard, and old assets will hopefully never die:

Pasha is apparently adept at overcoming old divisions. However, it is worth listening closely when the general explains why he too is unwilling to apprehend the Taliban leadership, even though many claim that Taliban leader Mullah Omar, for example, is in Quetta, a city where Pasha lived until a few years ago. “Shouldn’t they be allowed to think and say what they please? They believe that jihad is their obligation. Isn’t that freedom of opinion?” he asks, defending extremist rabble-rousers, who are sending more and more Koran school students to Afghanistan to fight in the war there.

Koelbl states the obvious when she notes: “Such words from Pasha arouse the old suspicion that the ISI is playing a double game.”

This entry was posted on January 8, 2009 by Siddharth Varadarajan in Pakistan, Terrorism.