NSG Diary: Finding a way round the Code of Omerta 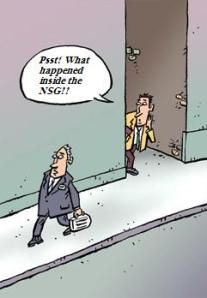 So how do reporters find out what the hell happened inside the fortress where the Nuclear Suppliers Group met for two days this week… And how will did India, and more importantly the United States, prepare for this meeting, which ended inconclusively on Friday…

Finding a fix to the NSG’s code of Omerta

Vienna: In keeping with its clubby, secretive character, the Nuclear Suppliers Group has a policy of strict confidentiality. Which means no official briefings or informal readouts of what transpires within, even by those unnamed “Western diplomats” who otherwise are quite happy to throw scraps of information to reporters.

However, with officials from 45 member countries moving in and out of the Japanese mission where the group is meeting, it was possible to glean some sense of the direction in which the cartel’s deliberations were headed. As diplomats made their way out of the building, many ducked aside at the sight of journalists but others proved amenable to being accosted and primed for information.

In general, officials from countries without a dog in the fight, whose governments did not have strong views in favour or against the American proposal to grant India a waiver from the supplier group’s export rules, seemed more inclined to chat with the press than others. And the juniors tended to be more forthcoming than their more seasoned colleagues. One young official from a country strongly opposed to the proposal was about to talk to The Hindu when he caught a glare from a senior colleague and backed off.

“I am sorry but you know the NSG’s proceedings are strictly confidential,” the senior official told this correspondent brusquely, before shepherding the junior diplomat away.

That India still has some lobbying to do to explain why any linkage to the Nuclear Non-Proliferation Treaty is unacceptable to it became apparent to this correspondent when a group of diplomats from a country strongly in favour of the Indian exemption asked, at the end of an interview to The Hindu, whether it might not be possible for New Delhi to eventually sign the NPT. The diplomats, who had flown in to Vienna from their capital especially for the NSG meeting, actually missed Foreign Secretary Shiv Shankar Menon’s briefing for NSG members on Thursday. The NSG had adjourned shortly after 11 a.m. and the Indian briefing started at around 11.30 a.m. However, 30 minutes was obviously not enough for all officials to take the elevator down from the 27th floor of one building, where the Japanese mission is located, walk across to the Vienna International Centre (VIC), collect a pass, and make their way to the board room of the International Atomic Energy Agency that India had commandeered for its special briefing. “By the time we came in, the briefing was already over,” one diplomat lamented. “So could you please tell me what is India’s answer when some countries say you must commit to eventually signing the NPT?”

Insisting that India sign the NPT was the principal slogan raised by Ulrike Lunachek, a member of the Austrian parliament and prominent leader of the Greens, who staged a well-advertised but small protest demonstration outside the NSG meeting on Thursday morning. With two party activists holding a banner aloft and three activists forming her audience, Lunachek attacked the Austrian government for not being more vocal and firm in its opposition to the Indian deal. She accused the coalition government of Chancellor Alfred Gusenbauer of currying favour with India in order to win Delhi’s backing for an Austrian bid for a non-permanent seat on the United Nations Security Council. Sadly for her, there were hardly any journalists to witness the protest, nor any NSG officials, since they had all already moved across to the VIC for the Indian briefing. With Gusenbauer’s government on the way out and fresh elections slated for September, it is evident that the Indian issue is getting reflected in the local politics of this strongly anti-nuclear country. Citizens here voted overwhelmingly in a referendum a few years ago to shut down Austria’s first reactor even before it was ever switched on.

So seriously did India take the NSG leg of the nuclear deal that it fielded one of its most powerful diplomatic delegations to date to hard sell the country’s case to countries that are still sitting on the fence and deal with any amendments the U.S. side might throw at them. Apart from Foreign Secretary Shiv Shankar Menon, the Indian officials here included R.B. Grover from the Department of Atomic Energy and D.B. Venkatesh Varma, both of whom were key negotiators during the earlier phases of the deal. Then there was the Prime Minister’s special envoy, Shyam Saran, Geetesh Sharma from the DAE, Naveen Srivastava, who is Director, Foreign Secretary’s Office, and Dr. Virander K. Paul, director in the Prime Minister’s Office. This on top of the multiple delegations that travelled to all the NSG country capitals in the run up to the Vienna meeting. But as the NSG’s deliberations ran aground here, it became apparent to the Indians that the Americans had not invested the same diplomatic energy in convincing their friends and allies across the world.

2 comments on “NSG Diary: Finding a way round the Code of Omerta”

This entry was posted on August 23, 2008 by Siddharth Varadarajan in Nuclear Issues.