Prachanda: ‘We want new unity on a new basis with India’ 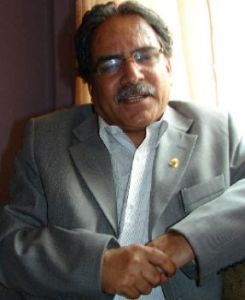 Without taking cooperation with India forward, we cannot do anything for Nepal, says Prachanda in an interview to The Hindu.

Ever since the Maoists won the Constituent Assembly elections in Nepal, the rush of visitors and well-wishers at Chairman Prachanda’s residence and office has been relentless. Despite his punishing schedule, the man who is likely to be Nepal’s next Prime Minister took the time to give The Hindu an exclusive, hour-long interview on April 24. In precise and even chaste Hindi, Mr. Prachanda spoke about the future of Nepal-India relations, his party’s plans for the new Constitution and the difficulties that lie ahead.

It is widely acknowledged that India played a crucial role in helping the Maoists and parliamentary parties forge a common front and in ensuring the Constituent Assembly elections were held as scheduled on April 10. And yet, there has also been a residue of suspicion between New Delhi and you. What is your assessment of the role India has played in this entire process?

The positive approach of the Indian government was a major factor behind the 12-point understanding reached in Delhi between the parliamentary parties and us in 2005. That agreement wouldn’t have been possible if the Indian government’s support hadn’t been forthcoming. It is from there that a new relationship between India and Nepal begins — and particularly the improvement in relations between the GOI and us. Before that, there was a lot of suspicion and contradiction. But from then to now, the attitude and help of the GOI is known to everyone. It is an open secret. India has consistently been in favour of elections. It had said all along that without having elections, a stable Nepal cannot be established, that elections should be held on time. Similarly, India’s emphasis on taking the peace process forward is known to all. So through this, there has been a great improvement in relations.

At the same time, our party had lingering doubts before the elections, that India could do something … For example, a statement came from Delhi that we cannot really trust the Maoists, that our [choice] is the Nepali Congress. We saw this statement and were a little concerned that this traditional mindset might have an effect on the elections. So I made a comment that a responsible official in India should not say these things on the eve of elections, that the implication of such statements is not good. Later there was an attempt to clarify things from Delhi. Still, there was a doubt in our mind. But after the results, we feel a basis has been prepared for relations with India to become even better and that whatever little suspicion and doubt existed has now ended.

It is also possible that as far as Delhi was concerned, there were doubts about whether we would go for elections or not, whether we would take part properly. But I think that through this election and its results, the doubts that were there in India’s mind have also ended and a new basis has been prepared to have new unity and new cooperation. I feel the atmosphere now has changed dramatically. India is openly saying it has no problem in working with and unconditionally assisting any democratically elected government.

So are we now at a turning point in the bilateral relationship between India and Nepal?

This is my belief. Earlier the problem was India’s two-pillar theory [of support for constitutional monarchy and multi-party democracy]. You will recall in my first interview to you in 2006, I said the two-pillar theory is the biggest obstacle and that as long as India does not abandon it and come out in support of the Nepali people, there will always be difficulties. Fortunately, the 19-day andolan led the GOI to clarify it would respect the people’s verdict, even if this was for a republic. That was historically a very big change in Delhi’s policy. And the 12-point understanding represented an equally big change in the Maoists’ position and attitude. Thanks to these changes and other developments up to the elections, a historically new basis has been prepared.

I am very happy about this because of our cultural, historical and geographical relations with India and because India is a fast growing economy. Without cooperating with India, it is not possible to bring stability and prosperity in Nepal; indeed it is more or less impossible. Any practical leader, anyone who understands reality, cannot be confused about this — that without taking cooperation with India forward, we cannot do anything for Nepal. And I’m also happy that India’s leaders and people also understand that only a stable, prosperous Nepal can be in India’s interest. I think slowly people in India are realising that in order for Nepal to have peace, stability and prosperity, a new leadership and party like the Communist Party of Nepal (Maoist) is needed. So I think we can go very far together.

Your party wants the 1950 treaty scrapped and there are many in India who agree this treaty is no longer relevant. But what sort of changes would you like to see in a bilateral treaty?

The 1950 treaty exists but based on the situation in the first decade of the 21st century, we feel it will be better for Nepal and India to have a new treaty. This is our clear and categorical belief. Our people have the feeling that somewhere along the line, the kind of benefit Nepal could get is not there, so the Nepali people’s aspiration has been to change this. Second, we would like to review all the other treaties to see what revisions or further enhancements are necessary. What we want is new unity on a new basis with India. Far from wanting to damage our relations, we want to make them even better. That is why we speak of new unity on a new basis. This basis has been established by all that has happened from the 12-point understanding till the elections, so the two sides should sit together and review the relationship with an open mind and see how we can move it forward.

In your party’s earlier 40-point programme (of 1996), you have spoken about the need to close the open border between India and Nepal. Won’t this hurt the lakhs of Nepalis who come to India to work and live?

Our election commitment paper does not say our intention is to close the border. We are only speaking of regulating it better. India and Nepal should sit and discuss how to do this because criminal elements misuse this openness. We would like to talk about these things. We have no intention of closing the open border.

There has been a change in the situation and we need to move ahead based on this change.

There has been some apprehension in India about the meaning of your statement that Nepal should be equidistant from India and China. What exactly did you mean?

In political terms, we will maintain equidistance because to have an alliance and go against anyone would violate the geopolitical conditions and needs of our country. This is what we mean by equidistance. But we need to look at the ground reality too: the historical, cultural and geographical relationship with India is very different from China and this has to be acknowledged and factored into how we define our relationship. So in this sense, there cannot be equidistance with India and China. There is no open border with China, so how can there be equidistance? But as far as the question of an “alliance” is concerned, of siding with one against the other, it is in that sense that there is equidistance.

Your manifesto talks of stopping the recruitment of Gorkha soldiers for the Indian and British armies. Will this be easy for you to implement?

We have always maintained that this recruitment for foreign armies should stop. This is our position. But given the circumstances and the process by which we have come here – ours will not be a single party government – we will have to talk to the other parties to see how this sensitive and delicate issue can be resolved.

In their response to the Maoist election victory, the BJP have warned you not to be anti-Hindu. If they return to power in India, do you think relations with Nepal might change for the worse?

As far as I can understand the spirit behind the BJP’s latest statement compared to its earlier ones, there will not be any qualitative change in relations if they come back to power. I think their attitude is and will be to respect the decision the Nepali people have come to. Of course, religious fundamentalism could have an adverse impact. At the same time, I feel that if the BJP moves ahead on the basis of its latest statement, there will be no problem in talking to them or working with them should they be in government. As far as religion is concerned, it has been decided that the state will be secular. This does not mean Nepal will be anti-Hindu. It is nonsense to suggest this! Religious freedom will be maintained. State and religion should not be mixed.

The former chief of RAW, P.K. Hormis Tharakan has argued in an article that the victory of the Nepal Maoists is good for India since this will inspire the Indian Maoists to follow your example. Is this what you are advising the Indian Maoists?

What we are doing in Nepal is in keeping with the needs and sentiments of the Nepali people. So we are not going to tell anyone that you should also do what we are doing. We don’t have the right to say such things and we don’t wish to say such things either. But I do feel that what we are doing will send a strong message not only to Indian Maoists but Maoists worldwide — about how the Nepali Maoists have gone from bullet to ballot, how they have influenced and won the hearts and minds of the Nepali people, and how they have come to the position of leading the government and building a new constitution. This will be the subject of very big debate, and this will have a positive impact on Maoists everywhere because we have not betrayed our basic theory, we have developed it based on the changed situation in the world, and tried to move ahead on that basis. For example, even when the People’s War was going on, we concluded that multiparty competition is a must even in socialism. Not only in the phase of democratic revolution but also in the phase of socialism, if multiparty competition is not there then a vibrant society will not be possible. This is the conclusion we have drawn from the great revolutions and counter-revolutions of the 20th century. And on the basis of those conclusions we are moving forward. So I feel that for the Indian Maoist party, its leaders and cadres, these efforts of ours provide some new material to study, to think about and go ahead in a new way. Our efforts provide a reference point.

(Tomorrow: Prachanda on the future of the monarchy, the Nepal Army and the difficult task of writing a new constitution for Nepal.)

This entry was posted on April 28, 2008 by Siddharth Varadarajan in Indian Foreign Policy, Interviews, Nepal.