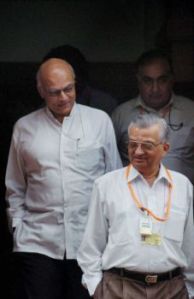 Given all that has happened in the past two years, Manmohan Singh needs to provide concrete assurances on the foreign policy front.

When the Indo-U.S. joint statement on nuclear cooperation was issued on July 18, 2005, three concerns were articulated within India. First, that the deal would hurt the country’s nuclear weapons programme, second, that it would impair the indigenous three-stage nuclear energy and R&D programmes, and third, that it would lead to unwelcome compromises on the foreign policy front.

The text of the U.S.-India Civil Nuclear Cooperation Agreement goes some way towards addressing the first two concerns. India’s right to possess and augment its weapons stockpile is preserved, as is its right to test. The costs of testing have been reduced somewhat by envisaging a strategic fuel stockpile that would allow for uninterrupted running of Indian reactors in the event of sanctions. So long as the NSG does not adopt clauses terminating cooperation in the event of an Indian test or withholding components for a safeguarded fuel cycle facility, there would be no real reason to worry about the “robustness” of India’s nuclear deterrent or the future of its three-stage programme. But that still leaves the wider foreign policy concerns unanswered.

To be fair to the Government, a technical document like the draft 123 agreement is hardly the appropriate place to seek or provide assurances about the independence of foreign policy. And yet, the Left’s arguments about the danger of entering into a strategic relationship with Washington have a wider resonance that Prime Minister Manmohan Singh would be unwise to ignore.

The issue becomes all the more urgent because the negotiating history of the past two years — as well as the decisions already taken on the foreign policy front — do little to inspire confidence about the future.

Consider the negotiations themselves. Right from the first day, or rather the eve of the first day, the government has been beset by bitter battles over the limits of what was acceptable to India and what was not. In Washington on July 17, 2005, the Department of Atomic Energy had to fight for the right to redraft a statement that the Ministry of External Affairs had already negotiated with the American side and which it considered final. It was only thanks to this eleventh hour internal battle that the strict reciprocity of U.S. and Indian commitments in the July statement was established. What happened that evening set a trend for the next two years. Invariably, these internal battles became more serious on the eve of difficult decisions: the anti-Iran vote at the IAEA in September 2005 (when a tightly argued note by Secretary Rajiv Sikri recommending abstention was overruled at the highest level); the contours of India’s separation plan in January and February 2006 (when some senior officials pushed for putting the fast breeder reactors into the safeguarded list); and the ‘right of return’ and reprocessing in the 123 talks — when the Government’s Apex Group on nuclear matters was forced, as recently as May 2007, to overrule a weak draft that the MEA thought was acceptable.

At every stage, the government was divided into those who felt it was easier to submit to U.S. pressure and those who argued India had nothing to lose from sticking to its principled positions. And it was not always that the latter prevailed. If a negotiating process that went through so many dubious twists and turns still managed to produce a reasonable 123 agreement, this was largely because India finally realised it pays to stick to one’s guns. But the country as a whole remains sceptical and the onus is on Dr. Singh to dispel this scepticism.

In safeguarding the independence of India’s foreign policy, two issues are important. First, any process of negotiation should seek to limit the levers of influence the U.S. or any other country or group of countries can exercise over India. Second, to the extent to which the U.S. offer of nuclear cooperation is motivated by unrealistic expectations on a wider set of issues, the Government of India needs decisively to clear the air so that there is no room for future misunderstanding. The full menu of American expectations is contained in the Hyde Act. U.S. Under Secretary Nicholas Burns added to this on July 27, 2007 by saying the U.S. now looked forward to greater cooperation with India in the military sphere. Each of these expectations and linkages must be rejected, and done so not by unnamed officials in the MEA but by the Prime Minister.

As far as the 123 agreement goes, the Indian negotiating team did a fine job limiting the amount of future leverage Washington can exercise but potential pressure points have not been completely eliminated. Reprocessing arrangements still have to be negotiated, and the right of return, though nailed down, still remains on paper. In order to further protect itself, India must do four things: Build reprocessing arrangements into the contract for any reactor purchased; build a fuel stockpile to provide the ultimate protection against termination for whatever reason, build “corrective measures” into its safeguards agreement with the IAEA, and limit the purchase of any U.S. reactor to a whole number between zero and one.

But this still leaves open the wider expectations the U.S. has on the foreign policy front. No doubt the Prime Minister will reassure the country that there will be no compromising with national interest. But rather than reiterating this in general, there are concrete assurances he needs to provide keeping in mind the water that has flowed under the bridge the past two years.

Iran and the Nimitz

The most glaring of all foreign policy compromises made by the Government was the vote against Iran in September 2005 at the IAEA Board of Governors. No less a person than the Bush administration’s former Under Secretary for Non-proliferation, Stephen Rademaker, admitted this February that India’s vote had been “coerced.” Combined with this submission to coercion was the highly irresponsible decision taken by New Delhi to play host to the USS Nimitz last mon th. Though attempts were made to claim the U.S. aircraft carrier was on its way home and was making a ‘harmless’ rest stop in Indian waters, the fact is that India refuelled and resupplied a warship that the U.S. promptly despatched back to the Persian Gulf as part of its gunboat diplomacy against Iran.

Today, if the Prime Minister wants to reassure the nation about the independence of our foreign policy, he needs to tell Parliament that if the Nimitz — having received Indian supplies and hospitality — is used by the U.S. in an unprovoked attack on Iran, the Government of India will consider this an especially unfriendly act.

Dr. Singh should also declare that India has no interest in signing an access and cross-servicing agreement (ACSA) or Logistics Support Agreement with the U.S. when the primary purpose of such agreements — as admitted by the former U.S. Under Secretary of Defence, Douglas Feith, in 2003 — is to allow U.S. forces to “move smoothly into, through, and out of host nations” as part of “military operations.” Given the destabilising effect U.S. military operations have in the wider region, the default setting should be no provision of logistical support for the U.S. armed forces. In the unlikely event that such U.S. operations are part of a U.N.-authorised effort, access can always be provided on a case by case basis. There is certainly no need for ACSA.

Since the Hyde Act explicitly calls for foreign policy congruence between India and the U.S., Dr. Singh should emphasise that his government rejects such a call. But even this declaration should not be left at the rhetorical level. In those areas where congruence has already begun, a process of disengagement is essential. This means sticking to the ‘Panchsheel’ principles in foreign policy and rejecting the division of Asia and the world into new blocs on the basis of which countries believe in ’democracy’ and which do not. Though the United Progressive Alliance government has decided it does not seek any military or strategic objectives through its association with the Shanghai Cooperation Organisation, it has no qualms about staging a massive naval exercise of the Neocon-inspired ‘Quadrilateral’ group of Australia, Japan, India, and the U.S. As part of the debate on the nuclear deal, the Prime Minister should clarify what India’s interest in the Quad really is.

When Parliament resumes its debate on the nuclear deal next week, these are the kind of concrete assurances that the Left should seek and the Prime Minister must give. At the same time, the hurdles at the NSG level should not be minimised.

The biggest danger is that the U.S. will try to wrest back from India at the NSG what it conceded in the 123, namely effective insulation from the consequences of a nuclear test.

For India, it is vital that the NSG rule change should not build in a clause stipulating that a nuclear test by India would lead to the end of cooperation. Such a rule did not exist and was not proposed by anyone in 1998, when, despite Pokhran, Russia concluded the Koodankulam agreement with India. The NSG must also not limit the scope of permissible cooperation to some arbitrary list of items. According to the July 2005 statement, the U.S. is committed to working with its friends and allies at the international level to bring about full civil nuclear cooperation and trade with India. Prime Minister Singh must insist — in public and in his conversations with the U.S. — that his government fully expects Washington to deliver this. There should be no ambiguity here. Even if Dr. Singh is able to address the fears the country has on the foreign policy front, an NSG rule change that denies India full civil nuclear cooperation or makes it conditional on a test ban will kill the deal as surely as night follows day.

This entry was posted on August 17, 2007 by Siddharth Varadarajan in Nuclear Issues.