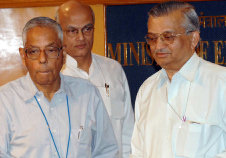 Between the lines of Kakodkar-speak, support for the nuclear deal.

“I could have a huge wish list. That’s not the point. What objectives did we set out with J18 and M2 and are we consistent with that? And the answer is yes.”

“I think we [the Department of atomic Energy]are all karmayogis. So, we just carry the work on and this will allow us to remain consistent with that philosophy in an expanded manner.”

28 July 2007
The Hindu
[In the Hindu, this story was split into two. The link for the second story is here]

New Delhi: Fielding Atomic Energy Commission Chairman Anil Kakodkar but not the text over which its negotiators fought so hard last week, the Government on Friday officially announced that it had finalised the agreement for civil nuclear cooperation with the United States.

At a joint press conference, National Security Adviser M.K. Narayanan, Foreign Secretary Shivshankar Menon and Dr. Kakodkar pronounced themselves satisfied with the final text of the accord, also known as 123 agreement.

They said it was fully consistent with the commitments undertaken by both countries in the July 18, 2005 and March 2, 2006 joint statements.

Also on Friday, External Affairs Minister Pranab Mukherjee and U.S. Secretary of State Condoleezza Rice issued a joint statement announcing the completion of negotiations on the 123 agreement and calling this “a historic milestone in [the] strategic partnership” between the two countries.

The next steps now include India negotiating a safeguards agreement with the International Atomic Energy Agency (IAEA) and getting “support for nuclear trade” from the Nuclear Suppliers Group (NSG), they said.

Though Mr. Narayanan said the 123 text would be made available soon “at a time to be agreed by the two governments,” a ‘Fact Sheet’ issued by the Ministry of External Affairs listed some of the “features” of the agreement.

Among these, the agreement is “between two States possessing advanced nuclear technology, both parties having the same benefits and advantages;” it covers nuclear reactors “and aspects of the associated nuclear fuel cycle including enrichment and reprocessing;” it “contains a full reflection of the March 2, 2006 supply assurances and the provision for corrective measures;” and it “grants prior consent to reprocess nuclear material [in] a national reprocessing facility to reprocess IAEA safeguarded nuclear material and the parties will agree on arrangements and procedures within one year.”

But beyond textual assurances, it was clear that the Government’s main weapon in selling the nuclear deal to the public was Dr. Kakodkar, the man who had publicly articulated his concerns when it emerged that the U.S. was attempting to move the goalposts in the deal.

Mr. Narayanan acknowledged as much when he said the Prime Minister left “most of the talking” to the AEC Chairman in his meetings with the Left and the BJP about the 123.

Asked for his reaction, Dr. Kakodkar said he was satisfied and that the “objectives” set out in the July 2005 and March 2006 statements had been met. He chose his words carefully, both out of habit and because the Government is conscious of how Washington might react to any expressions of happiness in Delhi.

Indeed, the complexity of the Government’s PR task was amply on display on Friday when Mr. Narayanan had to simultaneously allay concerns about both the inadequacy of India’s nuclear weapons arsenal and the fear that it might grow too big.

In response to a question, he said no one in India had reason to be concerned about the lack of fissile material for the strategic programme. But to another question, he said that it was time “certain countries” stopped saying India was entering into this deal in order to make more bombs.

In his own comments on the text of the recently finalised bilateral nuclear cooperation agreement with the United States, the Government’s top nuclear man may have been laconic and understated but his endorsement of the deal rang clear.

Asked whether he was satisfied with finalised text, he answered monosyllabically, “Yes.” Asked again, he said, “I would describe this as satisfactory from the point of view of carrying forward our nuclear programme.”

When he was reminded about the unhappiness he had expressed in the past, he said: “The point is simple. Whatever I had said earlier was a part of national position. What I am saying now is national position. And this agreement is consistent with national policy. I have no reason to be unhappy.” Later, he said, “I was unhappy when [full cooperation] was not there.”

But in response to specific issues, Dr. Kakodkar was more forthcoming.

Asked whether the deal now allowed “full” cooperation, he said the objective was to make sure India benefited not just from reactors and fuel supplies but also in terms of accessing the additional energy in spent fuel in an “unhindered chain.” “This agreement,” he said, “gives advance consent rights for us to reprocess spent fuel and recover the material in a national safeguarded facility. So it allows us to derive the full benefit.”

To persistent questions about the consequences of a nuclear test by India given the Hyde Act’s unambiguous provision for the termination of cooperation, the three officials said the fuel supply assurances of March 2, 2006 were meant to cover the possibility of disruption.

“As far as we are concerned, [these] stand and will be carried out,” said Foreign Secretary Shiv Shankar Menon. “That’s our expectation.”

On his part, Dr. Kakodkar said, “The fuel supply assurances built into the March 2006 statement and this final draft agreement are entirely consistent.”

The agreement “in its final draft,” he said, “allows the country to continue its domestic programmes whether three-stage civil energy, R&D and strategic and access international cooperation. The rest is too speculative.”

The officials acknowledged that they had not succeeded in convincing the U.S. to include access to reprocessing and enrichment technology and equipment but said they looked forward to the Nuclear Suppliers Group making a “clean and unconditional exception” for India. “I could have a huge wish list,” said Dr. Kakodkar in response to a question.

“That’s not the point. What objectives did we set out with J18 and M2 and are we consistent with that? And the answer is yes.” The scientists and staff of the Department of Atomic Energy were “karmayogis,” he added. “So, we just carry the work on and this will allow us to remain consistent with that philosophy in an expanded manner.”

One comment on “Nuclear deal is satisfactory, says Kakodkar”

This entry was posted on July 28, 2007 by Siddharth Varadarajan in Nuclear Issues.