Blame the police, not the messenger

By failing to act decisively against the Hindu chauvinist organisations which are targeting Christian priests and missionaries in Rajasthan, Maharashtra, and elsewhere, the police are only increasing the likelihood of copycat attacks 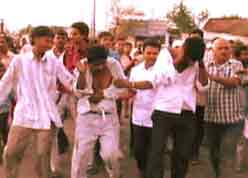 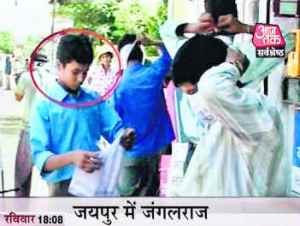 Blame the police, not the messenger

“I can still hear the cries of the helpless pastor in my ears. I had never imagined such cruelty was possible. I had never ever seen anyone beat a defenceless man in such a heartless manner.” — Sharat Kumar, Jaipur correspondent, Aaj Tak.

ON APRIL 29, a pastor in Jaipur, Walter Masih, was beaten mercilessly by activists and goons associated with the Vishwa Hindu Parishad. We know this because unlike the scores of other incidents in which “unidentified assailants” have attacked Christian priests, preachers and missionary workers in Rajasthan, Uttar Pradesh, Madhya Pradesh, and other parts of India, two brave television journalists managed to film this particular crime at great personal risk to themselves.

Thanks to them, we saw the faces of the attackers and know the names of their ringleader. His position as a senior leader of the VHP is a matter of public knowledge. That the police took more than 10 days to arrest him is another issue.

Ordinarily, the exposure of such a shocking crime on television should have goaded the police into action and put the VHP and its kindred organisations on the defensive. Thanks to the laxity of the police, however, the opposite has happened, with the Bajrang Dal activists in Kolhapur who brutally assaulted two priests on May 6 behaving even more brazenly than their Jaipur counterparts.

Sharat Kumar is the Jaipur correspondent of Aaj Tak, a leading Hindi-language television news channel. Mohanlal Jain is the channel’s cameraman. It was the footage this duo captured that was later shown on Aaj Tak and shocked the conscience of the country. There is no doubt in my mind that had they not been present, Mr. Masih would have beaten even more mercilessly, perhaps even killed. And yet, the two journalists today find themselves under fire. VHP and Bharatiya Janata Party leaders, upset that the involvement of Hindutva organisations and activities in the crime has been exposed, have started blaming the “media” for being part of a “conspiracy.” And as if on cue, a section of the media has started a fruitless debate on whether the journalists concerned were accessories to the crime by their presence or their “failure to intervene.”

Whether intended or not, this debate has shifted our focus away from the culpability of the perpetrators and their leaders. It is precisely in order to clear the air about how he and his cameraman came to be present that Mr. Kumar has decided to tell his side of the story.

In a first person account I received by email, Mr. Kumar narrates how at approximately 1.20 p.m. on April 29, he received a phone call informing him that Bajrang Dal and VHP activists were planning to stage a demonstration outside a Christian school located in a lane next to the residence of a local Congress politician. Mr. Kumar was told that two TV channels and one newspaper had also been informed about the programme.

“We took about 15 minutes to reach the spot. When our car reached the Nandpuri road, I was shocked to see more than 50 people with lathis in their hands sitting around near the shops. I instructed my cameraman to quietly film their faces and lathis. I knew that this organisation would not hesitate to smash our camera if they felt they might be implicated in any way.”

Unknown to Mr. Kumar and Mr. Jain, two VHP activists had already entered the pastor’s house and started beating him. As for the goons outside, they assumed the cameraman filming them was “on their side” and had been duly deputed to be present by their leader.

At this point, writes Mr. Kumar, he got out of the car. Standing at some distance, the man who was leading these goons, a senior VHP leader, spotted him. “He started moving towards me shouting filthy abuses and asking, `How come he is here, he is from Aaj Tak, quickly cover up your faces.’ Upon receiving a signal from their leader, the goons started advancing towards me, saying `If he tells anyone, we will beat him up as well.’ Bearing in mind earlier incidents when our camera had been smashed, I instructed the cameraman not to argue with them but to continue filming everything carefully.”

All of a sudden, these activists went and stood outside a particular house. One of them knocked on the door. A man opened the door from inside and ran out quickly and then the crowd rushed in. The Aaj Tak cameraman quickly followed them inside. “I had told the cameraman not to stop filming. As soon as he entered, he saw that two of the attackers who had been present before had already badly beaten the priest.”

Mr. Kumar writes that since he is one of the few TV journalists in Rajasthan “who have consistently been raising our voice against the activities of the Hindutva organisations and have thus been targeted by them,” he thought it best to stay outside.

After a while, he also entered the house. “As soon as they saw me, the attackers ran out quickly. The entire incident happened so quickly that even we were taken aback. Our footage of the entire incident lasts barely 70-80 seconds. And it is during this time that they carried out their attack, something we had no forewarning about. After seeing this incident, my hands and feet started shaking. This was the first time in my career as a journalist that I had seen such a barbaric incident.”

Mr. Kumar went straight back to office. After informing his seniors about what had happened, he phoned the police and told them about the incident. “Mindful of my social responsibilities, I called the police over to my office, showed them the entire footage and identified the saffron goons,” he writes. “The SP asked me if I could name any of the attackers. Soon after that, I saw a senior VHP leader [Virendra Singh Ravana] giving a statement on ETV Rajasthan. I immediately phoned the SP to tell him this was the same man I had seen leading the attackers. The SP told me that he too had identified the leader of the attackers.”

Mr. Kumar is understandably upset at the inspired finger-pointing that has now started against himself, his cameraman and TV channel. The VHP activists had started surrounding Walter Masih’s house from 11 a.m. and the spot was hardly one kilometre away from Rajasthan Chief Minister Vasundhara Raje’s residence. And yet the police knew nothing about the incident. “If I had not received news of what was happening, and had we not reached the spot immediately, the people beating the pastor inside his house would have escaped. Isn’t it also true that had our camera not captured their faces, their identities might never have been known? And the police would not have got any information either. And just as in the past, another 4-line news item would have appeared that `unknown persons’ have attacked a priest in the city.”

Mr. Kumar is absolutely right. He and his cameraman lived up to their responsibilities both as journalists and citizens. Their presence and act of filming, in the final analysis, acted as a deterrent for the cowardly goons. This is not to say that the camera, in other circumstances, never incites or inflames violence. It can and does, and journalists should always be vigilant about this possibility. But the question to ask in this instance is not whether Mr. Kumar and Mr. Jain did the right thing by exposing the criminals. The real question is why the police — despite having footage and eyewitness testimony establishing the identity of the attackers and their leaders — have yet to act in a decisive manner.

2 comments on “Blame the police, not the messenger”

This entry was posted on May 11, 2007 by Siddharth Varadarajan in Communal Violence, Human Rights, Indian Politics.